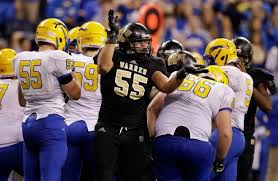 Carmel and Warren Central played a great game Saturday night. Sadly, only one team could win.

Sidelines reporters for sporting events have it easy most of the time – ask two simple questions of coaches that elicit enlightening responses as teams exit the field for halftime, emerge from their locker rooms, and immediately after the game ends.  Other than one or two unique observations per quarter, and that’s about it.

Coaches know what they want to communicate to the media, and the questions only need to open the door for that response.  There is the option of being a provocative jerk like Jim Gray, but poking an emotionally raw coach might provide drama but does little to bring understanding to a big moment – especially during high school state championships.

I had never done sidelines before the Indiana High School State Football Championships Friday and Saturday nights, and I really enjoyed the process.

During a normal radio show, interviews can last 12 minutes, and preparation is needed to have a worthy discussion with a guest.  Doing sidelines requires a maximum of two questions, so comparatively it’s child’s play.

There are moments though that a coach is curt, and while I would never hope for that to happen while I’m talking to him, that it did during halftime of the 6A game was actually kind of fun.

Carmel and Warren Central were in the middle of an intense defensive battle.  The halftime score was 3-0 in favor of Carmel, and the talk in the booth between play-by-play voice Matt Taylor and analyst Jan Boser turned to whether Carmel might try to open up its offense in the second half.  Their conversation made the question relevant, and delivering an answer for listeners became the obvious choice for a second question to Carmel coach Kevin Wright.

The coaches know that they have an interview as they head into the tunnel for halftime, and as they come out.  The coach of the leading team does TV and the other does radio when the first half ends.  As they return to the field, those assignments are flipped.  We make sure that there is no waiting for the coach – as soon as they come to us, we go live.

Wright walked out of the tunnel, and I said something like, “What a unique first half.”  It’s not specifically a question, but a statement that is open to interpretation.  It allows a coach to talk about whatever he thinks is relevant.  Wright glared and responded, “What was so unique about it?”  I told him 3-0 doesn’t happen very often.

Click here to get your teeth the best care possible from Dr. Mike O’Neil

[I should mention that these are my recollections, and the quotes are likely imperfect.  It’s also worth noting that I like Coach Wright, and in no way am I trying to paint him as petulant or his behavior as inappropriate.  When in the middle of a battle requiring great focus, being perfectly accommodating to the media is a ridiculous standard.  The media generally deserves the treatment they are accorded.  I recount the story only because it was interesting to me.  These things happen once in a while, and I enjoyed the experience.]

Then I asked the question from the booth about opening up the offense.  Wright was no more pleased than my first little statement-question.  I don’t recall the specific response, but it involved a Nick Saban-esque stare and had something to do with Carmel being in the lead.  It’s true that questioning the strategy of the coach who is leading seems silly, but given the early conversation it was something the audience had reason to be curious about.

To be honest, I far prefer the unvarnished honesty of a coach like Wright to the inane blather from those trying to make inoffensive noise with meaningless cliches.  I like Wright even more now than I did before the game, and his post game comments about Warren Central’s performance and the pride he felt in the way his team overcame some unique adversity were gracious and magnanimous.

State championship games are unique in that the kids playing them will never forget a moment.  They are ingrained in their minds forever, and the coverage of the games need to bear that in mind always.  Just as with the coaches and fans, the broadcasters are there for the kids.  Our job is to tell the story of one of the great moments of their lives.

Doing a radio talk show is fun, but we sit in a studio trying to imagine the faces of those who are listening.  Doing sidelines for the games, you are looking young men in the eyes as they compete.  You talk to coaches who are trying their best to provide their kids an advantage as they try to help the team they lead to a dream validating victory.  One team wins, and one team loses.

The emotions are raw, and the coverage should be dramatic but fair and free of blame.  Congratulations to all the players and coaches who competed so fiercely throughout the six championship games.

It would be easy to talk about some of the play calls and questionable officiating, but the only relevant story was conveyed in the eyes and words of those who have sacrificed so much of their young lives to achieve a shot at that ring.

It was cool to be a small part of the permanent record of unforgettable championship level efforts, and it was fun to be the recipient of some heartfelt discourse from a coach who was concerned much more with the welfare of his kids than the sidelines guy with the microphone.

I would have said and done exactly the same thing.