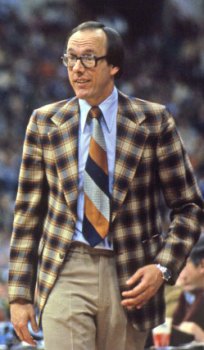 If Indiana wins tonight, fans get to make fun of Jim Boeheim again.

The 2-3 zone has been mostly relegated to the dustbin of defensive contrivances employed by coaches of fourth grade basketball teams who don’t know enough about man-to-man to teach it to children – except in Syracuse.

Jim Boeheim has won 927 games using the 2-3 zone as his defense since 1976.  That puts him only 36 wins behind Mike Krzyzewski for the all-time lead, which makes it hard to mock the guy or his teams.

It was especially hard last March to feel superior to Boeheim as his Syracuse team sent the best Indiana team in 20 years home after vexing the Hoosiers with the same 2-3 he’s been running forever.  The 61-50 loss ended the dream of a sixth NCAA title, but as is always the case in sports, more chances always loom on the horizon.

Tonight, Indiana will be at the Carrier Dome to face another test administered by Professor Boeheim.  Syracuse is never great, but always seem to be good.  One National Championship is a testimony to a lack of greatness, but anyone who scoffs at the Orange for repeatedly selling out with their 2-3 makes a mistake.

If beating Syracuse was as easy as moving the ball quickly and popping it into the middle, Boeheim would have been fired before the Reagan Administration began.

The days when Indiana fans could feel superior to those from Syracuse are over.  Current students at Indiana can’t remember a time when Indiana’s program was superior to the collection of talented but flawed kids who guarded their areas instead of men in the New York snow belt.

Jim Boeheim is relentlessly nice, and he looked it.  If you see him at the host hotel for the National Association of Basketball Coaches confab that runs concurrent to the Final Four, he will be gracious, decent, and accommodating.  He treats fans and media with respect.  To IU fans, that made him a bigger sap than what they already thought he was.

Indiana fans reflected their coach back in the day.  They were haughty asses, and loved every minute of it.  Those days are over – ruined by Bob Knight’s reluctance to recruit, Mike Davis’s indifference to IU’s history, and Kelvin Sampson’s unfortunate combination of arrogance and stupidity.

Click here to get your teeth the best care possible from Dr. Mike O’Neil

My theory is that Indiana fans miss the license to mock others more than they miss the wins, and while Tom Crean has provided wins, it will take National Championships to credential fans to be worthy of ridiculing a coach like Boeheim.

Most of the old time guys who IU honks berated are retired or dead, but Boeheim continues to plow through the decades with eternal youth and consistent results.  Dean Smith, Dale Brown, Eldon Miller, Joe B. Hall, Lou Henson, and countless others were targets of Hoosier condescension for generations.

Hard to mock Boeheim now, and unless Indiana can outpace last season’s clunker, Hoosier fans will be forced to endure another loss against the same guy who used to be easy pickins.