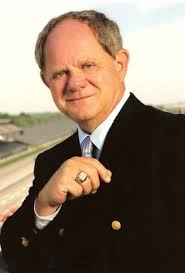 Nationally, Paul Page is best known for his work describing Joey Chestnut and Kobayashi dueling for the Nathan’s Hot Dog Eating Championship every Fourth of July.

Other than bring Sid Collins back from the dead, there is no hire that could evoke the history of the IMS Radio Network like that of Paul Page.  Given that he still does great work, the decision to name Page to replace the easily agitated and verbose Mike King was logical.

The decision came down to Page, Bob Jenkins, and Mark Jaynes, and while I would have loved to see Jaynes get his chance to anchor the schedule of IndyCar.  He’s a pro who is both adept at describing the action, but more importantly he can listen and anticipate what questions the listener would like answered.

Many hosts can speak with grace, but few listen well.  That’s what separates the good from the great, and I always suspected that Jaynes is a very adept listener.  I found out first hand as the sidelines reporter for the 5A IHSAA Football State Championship broadcast that he anchored last Friday.

Jaynes never elevated his own importance above that of the game, and was exceptionally easy to work with as a result.

There is no question that Page knows racing, the Indianapolis 500, and how to use his team, and as long as Vin Scully is still getting it done, everyone under the age of 70 is still a relative kid in Broadcasting.  Page is 18 years Scully’s junior.

King’s departure is not unpopular among his former co-workers, and if Page involves his team without upstaging them, he will be a very popular upgrade.  One of King’s habits was to ask a reporter a question and then answer it.  He also developed the habit of providing information to listeners before engaging a reporter prepared to provide it him or herself.

The heritage of this network is one of the great stories in broadcasting, and Page was a big part of it for years as he was a part of Collins team from 1974-1976 while also doing traffic on WIBC.  He was the host of the broadcast for the next 11 years.