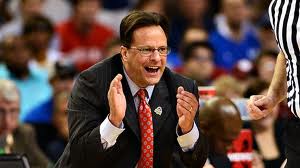 All day long, questions pop into my head, Facebook message center, Twitter feed, and email box.  Answers swirl in my head at such speed that they can only be answered by short bursts in this post.

A:  Hoosier fans better hope so because Crean isn’t going anywhere as long as Fred Glass is the athletic director.  Glass respects Crean a great deal, and given the luck needed to win the six straight games necessary to be the last team standing at the end of an NCAA Tournament, the lack of a banner isn’t grounds for dismissal no matter how long the drought.

There are factions of Hoosier fans pining for Brad Stevens once his reign in Boston comes to an end, but they aren’t thinking clearly.  Whether you love Crean or not, he will call Bloomington home until he decides not to.

The irony is that the only way he rolls out is if a better offer comes along – similar to the Celtics job that wooed Stevens to Boston – but if the results of his work at IU are so good it causes the employers at whatever his dream job is to make a big offer, no one will then want him to leave.

I can see Indiana going to several Final Fours given the level at which Crean recruits, but college basketball is too mercurial to guarantee a championship in any year or era.

A:  Given their 16-2 record, I wouldn’t bet against them, but LeBron James is still the boss of the NBA and the Pacers victory train will have to roll over the top of him to earn that banner.

The Funny thing about winning is that teams need to learn how to win in order to win more.  The core of the Miami Heat have won the last two championships, so they don’t need faith in their ability to win – or some goofy writer to confer hope upon them.  They know they can win because they have.

The Pacers, from ownership to the front office to coaches to players to bellboys, are hoping they have what it takes.

In the end, it will probably come down to the health of the Pacers and Heat to determine who comes out of the Eastern Conference.  LeBron is talking publicly about a back ailment and the Pacers are younger, so they have the actuarial advantage for continued wellness.

It would be the smart thing to say the Pacers will advance to the NBA Finals, but will get beat there because this roster has never been there.  But my intellect is trumped by my belief in this group.  There is a bond among them I think will carrying them a step beyond where smart folks will predict their road will end.

A:  Depends on your definition of success.  If it’s bowl eligibility, they will both regularly reach that level.  If success is entering the elite of the Big Ten, there might be an outlier season or two, but Indiana’s place in the Big Ten East is going to make a trip to the Big Ten Championship game as unlikely as Lloyd Christmas marrying Mary Swanson.  The Hoosiers will compete with Maryland, Michigan, Michigan State, Ohio State, Penn State and Rutgers.  No patsies there.  Fortunately, Wilson knows that excellence comes one step at a time, and measuring the 2014 Hoosiers against Ohio State’s program is lunacy.

Purdue has an easier road in the Big Ten West, but the Boilermakers are a long way from worrying about strength of schedule in any way other than how they will effect SOS for the other programs.

Wilson is two years ahead of Hazell in his rebuilding, as evidenced in last Saturday’s Bucket Game.  Indiana and Purdue will continue to get better until they reach the level to which both coaches are capable of leading their programs.

A:  I believe the question as you have asked it was meant to elicit a response about the historical mediocrity associated with the Chicago National League Ball Club.  They haven’t won a World Series since 1908, so there must be something in the delicious Lake Michigan water, right?

I am going to choose to answer the question differently, as in why will the Cubs suck in 2014 and 2015, and given their self-induced misery why do the Cubs continue to charge fans Sak’s Fifth Avenue prices for TJ Maxx baseball?

Minus a massive infusion of cash for free agents who can play, the Cubs are stuck with a farm system supposedly chock full of talent that is two years away.  That means holding on to talent that will become expensive in 2014 or 2015 is wasteful, hence the upcoming deal to send Jeff Samardzija to someone for three prospects.

Trades of anyone of value for youth will continue because there is no meaningful downside for not trading them.  Other than the saps paying the third highest average ticket prices (in 2013), who gives a damn whether the Cubs win 67 or 81 games?  Until the loyal to a massive fault Cubs fans start voting with their asses and wallets, the wait for the kiddie corps will continue.

Q:  Can the Indianapolis Colts win a playoff game? (P. Nagle – Monrovia, IN)

A:  Hell yes, they can.  Will they?  Who knows.  The Colts are 8-4 with the only win against the Seahawks, and wins against Denver and San Francisco.  They can win games.  Over the last five games that Colts fans lament as a portend of doom, they are 3-2.  A win against Cincinnati this Sunday, and the Colts will lock up the AFC South.  That will give them home field, and likely no worse than the #3 seed.

The Colts are a better team with Reggie Wayne than without, but as long as Andrew luck is drawing breath, the Colts won’t be overlooked by anyone.

One thought on “Will Kevin Wilson Succeed? Why Do the Cubs Suck? Will IU Win a 6th Championship Under Crean? Can Colts Win a Playoff Game? & Other Imponderables”