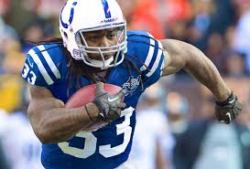 Trent Richardson might not be getting to the holes the way fans would like, but his behavior and words exceed all expectations.

Indianapolis Colts running back Trent Richardson did what men do yesterday.  He took responsibility for his lackluster performance in his quotes to Mike Wells in an espn.com post.

In “Hoosiers,” Myra Fleener’s mom tells Norman Dale, “The sun don’t shine on the same dog’s ass everyday, but you ain’t seen a ray of light since you got here.”  She would say the same to Richardson since the September 18th trade that brought him here from Cleveland for a first round pick.

Richardson was an anomaly in the 2012 NFL Draft – a running back taken third overall.  These days, running backs are a dime a dozen, and when an unheralded fifth round rookie like the St. Louis Rams Zac Stacy out of Vanderbilt can put together outstanding performances, why draft a back third?

It’s easy to point at others to explain poor performance.  The Colts offensive line hasn’t been rock solid this season, and offensive coordinator Pep Hamilton hasn’t schemed to get Richardson the ball in space, so he could have listened to his friends and family as they have privately squawked about the unfairness of his situation.

What he did in talking to Wells was accept responsibility.  That’s what adults do.

Pacers play-by-play voice Mark Boyle said yesterday to Joe Staysniak and I on 1070 the Fan that the maturity level of professional athletes is equal to a pampered 15-year old.  Richardson showed better stuff than that in talking to Wells about his demotion, “It was kind of like this is a place in your life where you have to learn and really see the offense and how things flow. I learned about myself Sunday, how humbling it was. I have to step up. I have to make sure I’m doing my job.”

The Colts have been very smart in signing, drafting, and trading for men will will accept responsibility for the roles they play in the team’s successes and failures.

As the Colts sit on the brink of salting away the AFC South, credit needs to be given to someone or something.  As fans continue to sweat over the less than aesthetically pleasing style of play since Reggie Wayne’s injury, something good must be happening because Indy is 3-2 since the hall of famer fell.

Fans are willing to throw a lot of blame around, but at 8-4, praise must be also be assigned.  I’m choosing to credit the culture of respect for teammates and coaches as the reason for some of this success.

The last five games could all have easily been losses.  During that 3-2 stretch, the Colts have been outscored by 45 points.  That’s nothing new as last season the Colts became the first team in NFL history to be outscored by 30 while posting an 11-5 record, but it’s still wacky math that has allowed the Colts to be the third seed in the AFC after 12 weeks.

Richardson embodied that culture yesterday in baring his soul to Wells, who has long been a reporter able to get interview subjects to speak honestly.  All the character in the world won’t compel a body more quickly to a hole, but it will help teammates feel a sense of community in the locker room as they look a newcomer like Richardson in the eye.

The Colts may go to the Super Bowl or flame out in the first round of the playoffs, but it appears that the Colts will each look in the mirror to try to find the answer to unlock their potential.

That’s all fans have a right to ask.