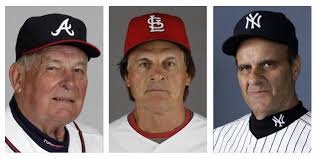 They were the three best managers of their generation, and their careers as major league managers almost perfectly dovetail one another.  It’s entirely appropriate that Bobby Cox, Tony LaRussa, and Joe Torre will be inducted into the National Baseball Hall of Fame together on July 27, 2014.

They are ranked third, fourth, and fifth all-time in wins, with LaRussa only 35 behind John McGraw for second place, so there is no question that these men are each deserving of this honor.

Lou Boudreau always said that a bad manager could lose a team as many as 25 games and win up to four during an average baseball season, and that underscores how difficult a job managing at the big league level is.

Managers are scrutinized through a season by the decisions that cause losses, and the wins are usually credited to the outstanding work of the players.  That makes job security as a manager almost impossible to attain.

As with managers in business, the true value of a baseball manager is in his ability to put his staff in a position where they are most likely to succeed.  These three managers were superb leaders of men.

It’s a worthy exercise to compare these three managers and rank them based upon their contributions to their teams, so here is how they rank in my pantheon of baseball leaders:

Torre leads the trio in world championships – all won while with the New York Yankees from 1996-2000 – and while he put together a phenomenal run as the manager of the Yankees for 12 seasons, he was not a consistent winner at his other four stops.

While working for George Steinbrenner presented many challenges, being the manager of a team so laden with young excellence provided Torre a great opportunity to win a lot of games.

In the 12 seasons Torre managed the Yankees, he four four titles and posted an 1,173-767 record.  In 17 other seasons with the Mets, Braves, Cardinals, and Dodgers won zero World Championships with a 1,153-1,230 for some very mediocre teams and some good teams.

The losing records for those 17 years does nothing to negate his overall work, but in this company it ranks him third.

Only one World Series championship is the black mark on what is an outstanding career.  When we grade a manager down because he only won one title tells you how great these guys are.

Minus the first seasons he spent at Atlanta (twice) and Toronto, Cox’s teams posted winning records 22 of 26 seasons.  Granted, he had a starting rotation that a third grader could have won 90 games with, but Cox turned good into great, and great into hall of famers.

The Braves won their division a mind-blowing 14 out of 15 seasons from 1991-2005 with a rotation including Greg Maddux, Tom Glavine, and John Smoltz.

That’s a hell of a gift for a manager, but in no way diminishes Cox’s contributions to titles.

LaRussa is the best manager of the modern era – better than any manager I have ever seen.  He won by getting the most out of his talent, and hiring coaches exceptionally well.  It’s difficult to separate LaRussa from his pitching coach, and I wish Dave Duncan was being inducted with LaRussa.  No one has milked more from a pitching staff than Duncan did in Chicago, Oakland, and St. Louis.

He is a brillant strategist, and has a wonderful gift for putting players in a spot where they have the best chance to succeed.  LaRussa understood match-ups and situations, and it was a treat to watch his final Cardinals team in 2011 on a daily basis.

How good was LaRussa?  In three stops – with the White Sox, A’s, and Cardinals – he managed at least 1,000 games for each.  The Chicago Cubs have had one manager total as many as 1,000 in a single stint since Frank Chance.  That was Leo Durocher who managed the Cubs for 1,065 games.  If Ken Harrelson had waited 31 more games to fire LaRussa – and Harrelson was a boob for doing it – LaRussa would have outlasted every Cubs manager back to Chance at all three stops.

The success and failure of managers is often a product of the talent at his disposal.  LaRussa is one of the very few that didn’t need great talent to achieve a great result.

St. Louis is not an easy place to manage.  Cardinals fans in the aggregate are the most knowledgeable in baseball.  That’s not to say that other teams don’t have some fans that know as much about baseball as anyone, but you can have a deep conversation with the least savvy baseball fan in St. Louis and enjoy it.  That put every decision LaRussa made in his 16 seasons in St. Louis through a tough filter, and he was never fired.

For that reason, LaRussa is the best manager of all time in my book.