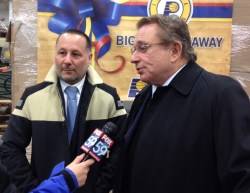 Pacers owner Herb Simon and JAKKS Pacific CEO Stephen Berman talk to the media about the partnership that has given 175,000 toys to Hoosier children.

Riding high with an NBA best record of 18-3 and LeBron coming to town tomorrow night, no one would blame the Indiana Pacers for taking today off to rest for their first test of the season from the team that refused them entry into the NBA Finals six months ago.

The Pacers beat the San Antonio Spurs on the road Saturday night, lost to Oklahoma City last night, got home at 2a this morning, and are playing the Miami Heat tomorrow night at home.

Today would have been a time for to relax and gather themselves for most franchises, but not the Indiana Pacers.

Owner Herb Simon, coach Frank Vogel, and players Roy Hibbert, C.J. Watson, and Orlando Johnson decided that rest could wait as long as there were kids at Stout Air Base waiting for toys.

They weren’t just there to join Stephen Berman, President and CEO of JAKKS Pacific, the world’s largest toymaker, in giving central Indiana kids a few early Christmas presents.  They enthusiastically engaged the children and members of the Indiana National Guard as they handed out the swag.

I started attending these events because they are great places to get interviews for that week’s “Ahead of the Curve” on 1070 the Fan, but now I go because it’s fun to watch members of the Pacers organization enjoy themselves as they help the community.

Every person in the media has been around professional sports franchises who act like the community service aspect of their lives was part of a plea bargain.  They do the least amount possible for the biggest bang in media coverage, and call the event a success.  The players and coaches 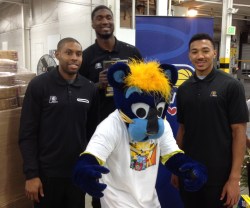 (from left to right) Pacers C.J. Watson, Roy Hibbert, Boomer, and Orlando Johnson pose for pictures after handing out toys to kids, and loading a truck with more.

sleepwalk through meeting the people they are helping, and then get back to their lives as quickly as possible.

They look at their watches, text friends, and appear entirely disinterested during these events.

The Pacers are the rare exception.  Either they are thrilled to help, or do a hell of a job pretending to.

People with a high profile can either use their celebrity for good or nefarious pursuits, and the Pacers choose to do so much good that it has become an intrinsic part of their culture.

I like being around that kind of energy, so I drove out to Stout despite having no use for any audio that preceded tomorrow’s big game.  The Pacers appear genuine in their desire to do the right thing for people in need, and I want to continue to see if the Pacers can meet my standards for sincerity in being community partners.

If there’s anything I loathe, it’s a charlatan.  Outing them is my greatest joy.  Going out to charitable events to gather audio and video is one thing, but what I really enjoy is ferreting out the nonsense from the real deal.  If the Pacers were playing Indy for fools and trying to build goodwill purely for business purposes, I would happily write that.

That comes from my cynical side.  With every event, the Pacers shove that cynicism deeper into the recesses of my character.  For that, I’m grateful to them.

Herb Simon agreed to talk for a few minutes, and because he is one of the most effective owners in pro sports I was happy to get his thoughts on giving back, the Pacers play, and the patience that was needed to rebuild his franchise.  Simon would serve Jerry Jones, Dan Snyder, and James Dolan well as a role model because he is very aware of what he doesn’t know, and hires those who do.

By the way, I’m quite aware that I might sound like a softballing sycophant in talking to Simon.  The thanks at the end is a little much, but my sentiments were honest, so I’m not ashamed of them.  He’s a good man who does good things.  He sets the standard for the culture of a team that figured out what it did wrong in the not so distant past and invested a lot of time, energy, and cash in rebuilding it the right way.