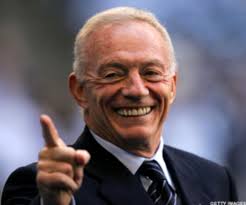 Who’s the smartest guy in Cowboys Stadium? We know for whom Jerry Jones casts his voteby Kent Sterling

by Kent SterlingLast night, the Dallas Cowboys were embarrassed in the arctic cold of Chicago’s lake shore, and tonight the Indiana Pacers with play the Miami Heat in the most eagerly awaited matchup of the young NBA season.

These two franchise could not be run more differently; one is very successful while the other has been relentlessly mediocre for 15 years.

Picking on Cowboys owner Jerry Jones is unnecessarily specific and cruel.  He could have easily been replaced by either Daniel Snyder of the Washington Redskins or James Dolan of the New York Knicks.  These three owners are interchangeable as owners of major league sports franchises.  They are activists who don’t simply meddle – they run the show.

Simon is a different kind of owner.  He knows what he doesn’t know, and writes checks to fill those holes.  What Simon does know is how to run a business.  If you have been out holiday shopping recently, you probably did it in a mall he owns.

What Simon doesn’t do is try to work the register or hire the managers at the Chess King store in the mall where people buy their eight ball jackets or leather slacks.  Jones would have people bringing him swatches of the fabric used to create the dresses sold at Lane Bryant.  Dolan and Snyder would product test everything sold at Spencer’s Gifts.

Jones isn’t just the owner of the Cowboys, he is also the general manager.  That is what make him an activist owner.  He’s not happy just to write large checks and cash larger ones.  He wants to busy himself with talent evaluation and hiring coaches.

Cowboys fans can tell you exactly what that leads to – a record of 111-110 in the 21st Century.  The Cowboys are resolutely and perfectly mediocre.  Welcome to Jerry’s world of finishing at or near .500.

Simon’s time since 2000 has been a little different.  The Pacers had come very close to morphing from the NBA finalist of 2000 into a completely new team ready to challenge for the NBA crown, and then came The Brawl.  The franchise staggered, and the pieces of that team, minus Reggie Miller, went from being loved to being loathed on that night (there were other subsequent missteps, but The Brawl started it all.

Since then, Simon has trusted the arduous rebuilding to team president Larry Bird.  I’m sure it was difficult at times for Simon to remain patient, but he let Bird make the moves that finally resulted in the blossoming of the Pacers that finally occurred during last year’s trip to the NBA Finals.

It took seven long years to deconstruct and rebuild, and the entire time, Simon never interfered.  He hired; he trusted, and he paid, as he waited for fans to return to Bankers Life Fieldhouse.

Click here to trust your dental work to D. Mike O’Neill – the best dentist in Indiana

And tonight they will return.  They will fill every available seat to see Paul George, David West, and Roy Hibbert battle LeBron James, Dwyane Wade, and Chris Bosh.  Through a quarter of the season, these are the two best teams in the NBA, and the bright lights will shine in Indianapolis again.

All because Herb Simon knows how to hire people while Jerry Jones, James Dolan, and Dan Snyder trust no one to be smarter than they are.

Ownership has its privileges, and one of them is not having to sit through performance reviews.  The owner is right – always.  His only consequence is scorn from fans, which is sometimes followed by a checkbook referendum from season ticket holders.

Simon suffered for years as the Pacers stayed away from the deals that would artificially move the turnstyles with easily excited (and duped) fans, but he stayed the course, and allowed men who know much more about basketball than he does acquire and assemble the parts of a roster that can win.

Jones, Dolan, and Snyder can’t stay out of the way for seven days, much less seven years.  They tinker, offer ideas, or act on their own.  Some wayward rich guys believe that money equates to smart in all things, and the records of the teams owned by Jones, Snyder, and Dolan confirm that is not the case.

Telling them they are screwing up their teams and making fans miserable won’t do any good.  They are the smartest guys in the room, and won’t be listening.

Pacers fans should say a silent prayer of thanks tonight during the big game that Herb Simon owns the team.