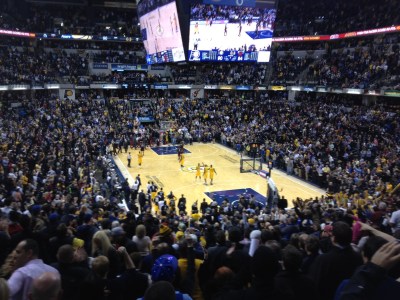 Bankers Life Fieldhouse rocks like it’s 1999 as the clock hits zeroes during the Pacers big win.

The Indiana Pacers started slowly which wasn’t a surprise, but against the two-time defending champion Miami Heat, holes shouldn’t be dug too deep.

Early it appeared that the Heat were intent on schooling the darlings of the NBA, and if that was the case, the Pacers learned very quickly, applied the knowledge, and used it to immodestly kick their supposed big brothers in the mouth.

Just as was the case against the Spurs in San Antonio on Saturday night, the deficit reached 13 points before the Pacers awakened to play the kind of withering defense that has come to define their brand of basketball.  After the LeBron James layup that made the score 44-31 with 2:20 left in the first half, the Pacers had their way, outscoring the Heat 59-40 to win the game 90-84.

The two free throws that comprised the first half offensive output of MVP candidate Paul George blossomed to 17 total points, and the 21 turnovers that led to 20 Heat points became a teaching point for coach Frank Vogel – not a reason for a loss.

The Pacers are now 19-3, three games clear of the Heat who dropped to 16-6 with just over 25% of the regular season in their rearview mirror.  There are 60 games left in the regular season, and that is not lost on Pacers center Roy Hibbert, “It’s just one game. We’re going to learn from it. We’re going to watch some tape on our first two quarters.  It’s still early in the season.  We have a lot more work to do.”

Hibbert had just finished scoring a game high 24 points on 10-15 shooting.  Privately, I’m sure he’s at least a little pleased with his effort, but it’s nice that he knows better this year than to get cocky and let his opponents know how pleased he is.

After the Heat scorched the nets in the first quarter, hitting 12-21 shots from the field, they cooled under the intensifying Pacers defense, hitting only 21-56 the rest of the way.

The Heat shot a miserable 19% from beyond the three-point arc, which was only slightly better than the unguarded Justin Timberlake an hour after the game as he fired up wayward three after wayward three with his hat worn backwards.  I tried to take a picture, but a security guard asked that I not do that.  I have many flaws, but failure to listen to men with badges is not among them.

After watching a dozen shots clank loudly off the side of the rim or miss it entirely, I understood Timberlake’s reluctance to have his skills chronicled.  That none of the shots I saw went in the bucket is the nicest thing I can say about the next Sinatra’s long distance bombing.

The best part of the night had nothing to do with what Timberlake, the Pacers, or Heat did on the floor, but came from the energy that existed in Bankers Life Fieldhouse.  The atmosphere was electric, more befitting a game seven of the playoffs – something that might happen for the Pacers this postseason, if they can continue to play consistently at this high level.

A sign one fan held read, “Built, Not Bought!”  I like the sentiment, even if the Pacers have there share of free agent signees and players acquired in trades.  The Heat played like a team of disparate parts, and the Pacers were very social with one another, and very cohesive in their behavior – if not in the passing.

This is a very likable team that Indianapolis is slowly falling back in love with.  Tonight’s sellout crowd (the fifth in ten home dates) was in full throat, and every bit as passionate and engaged as the crowds during the Reggie, Dutchman, Davis Boys, and Jack era.

For the Pacers and this generation of fans, a long love affair enjoyed another magical night.  A June wedding and long honeymoon might be coming, and if this reads like a love letter, it was just that kind of night.