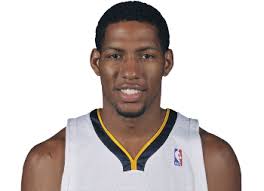 At some point this season, Danny Granger will play for the Pacers. No point in hurrying that day along when the Pacers have no need for him.

Indiana Pacers forward Danny Granger hasn’t played a minute this season, and only played 74 minutes last year.  Now healthy, or so he says, Granger is saying that he’s not ready to play tonight because he’s out of rhythm.

Sporting the best record in the NBA, the Pacers have shown they don’t need Granger right now to dominate their opposition, so Granger should continue to sit, condition, and do what’s needed to get himself ready for whenever the bell rings for him to report to the scorer’s table.

That time is not tonight against the Charlotte Bobcats, and barring injury it won’t come before the all-star break.

This has nothing to do with the $14,021,788 Granger is scheduled to make this season.  The number of zeroes on his paychecks have nothing to do with the decision coach Frank Vogel must make in deciding when and where to use Granger, nor should they be a consideration of Granger’s in determining his readiness to compete at the highest level.

The Pacers train is rolling.  Why would anyone – Granger included – decide that tinkering with the rotation that resulted in 19-3 is a good strategy?

The goal for the Pacers is to win an NBA Championship, and the roster in its current construct has shown itself plenty capable of beating the two combatants in the 2013 NBA Finals.  The atmosphere in the Eastern Conference Finals and NBA Finals is much different from those that led to two regular season wins – no matter how impressive – and Granger may be a difference maker then.

Because of that, Granger needs to continue to work on making sure he’s ready to play in April, May, and June.  A second unit including C.J. Watson, Danny Granger, Luis Scola, and Ian Mahinmi would be among the best in the NBA.

Just as the Heat are trying to get Greg Oden ready for what appears to be a likely Eastern Conference Finals duel with Rot Hibbert, the Pacers should try to get Granger good to go for that series.

Injuries would change the dynamic, but if all stays static on the Pacers roster, how much better would the Pacers be with Granger playing 18 minutes instead of someone currently getting the job done?

Would the Pacers have beaten the Bulls, Blazers, or Thunder with a healthy Granger?  Certainly not against the Bulls and Thunder, and doubtful against the Blazers.

In baseball, sabremetricians talk about wins over replacement – or WAR.  Right now, a healthy Granger through 22 games would have a WAR of zero.  In baseball, that number is derived through some complex calculations.  With a basketball player who is on the shelf, a tabulation of WAR is easy – at least in this case – the Pacers would have likely won every game they have won with Granger sitting.  They would have lost the other three. Coming up with the zero for Granger’s WAR doesn’t require a degree from MIT or Yale.

The Pacers are likely annoyed by the continued focus on Granger’s knee and calf health, but what the hell are people supposed to talk about?  There was a caller this morning to the Grady and Big Joe Show on 1070 the Fan who asked for the Pacers to win something before they get mouthy.  That call, as Michael Grady suggested at the time, was far more interesting (if confusing) than the call that followed praising Larry Bird as the team’s architect.

Of course, Bird has done a great job.  It can’t be debated.  Paul George has taken another step forward this season.  No debate.  Luis Scola and C.J. Watson were great gets during the offseason.  No debate.  The Pacers get along very well and don’t stub their toes in public.  No debate.  Frank Vogel is the perfect coach for this team, and David West is a gifted leader.  No debate, no debate.

All that is debatable is whether Granger should or shouldn’t play.  I don’t screw with a successful family recipe by adding an ingredient that may spoil the taste.  The money paid for the ingredient is immaterial.

The Pacers will be fine without Granger, so don’t risk losing him for the playoffs by playing him before you know he will help.  That’s debatable.