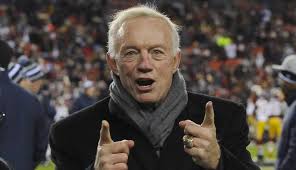 Never trust a man wearing a muffler or one who hires himself as a subordinate.

Dallas Cowboys is one of the five worst owners in professional sports because he’s unaware that his general manager is an idiot, and as a result refuses to blame him for the entrenched mediocrity in which his franchise is mired.

That the GM and the owner are both the same guy makes firing him problematic.

I can’t blame Jones.  What could be more fun than to pull the strings for an NFL franchise.  It would be like being a fantasy football owner/GM 365 days a year, except without the fantasy part.  For people who have difficulty saying no to themselves, allowing yourself to indulge your own appetite for fun at the expense of managerial logic would be impossible to deny.

Jerry Jones gets a bang out of being Jerry Jones.  Making a billion bucks in the oil exploration business allows idiocy to relentlessly reign without consequence, and that has caused the Cowboys to hang a perfectly average 135-135 since 1997 with a 1-6 playoff record.

So yesterday, when Tony Romo threw two picks in the last 3:00 of what became a horrific 37-36 loss to the Green Bay Packers in JerryWorld, people went looking for a person to blame.

Some looked at Romo because he checked out of a run to a pass, which led to one of the two late interceptions.  Others look at coach Jason Garrett, who authorized offensive play calling that resulted in eight second half runs and 22 drop backs despite leading 26-3 at the half.  Still others project their anger onto petulant receiver Dez Bryant for leaving the field before the game ended.

The finger should be trained directly at the hubristic noodle of Jones – a man so in love with his own talents that he doesn’t see his limitations.  Blaming Garrett is futile because everyone remotely engaged in watching the Cowboys knows that Jones runs the family and players answer to Jerry.  Romo is Jones’ guy, and Garrett is Jones’ guy.  No one in Jerry’s house is accountable to anyone but Jerry, and that makes Garrett a toothless skipper.

Jones is a benevolent sovereign, who allows chance after chance after chance to those who fail him.  The goal for Jones isn’t winning championships, but the continued leveraging of the flagship franchise of the NFL for both the cash and position it affords Jones.

If the goal was a championship, Jones would look in the mirror and hire a general manager capable of winning one.  That GM would hire a coach capable of teaching the game to his quarterback.  Jones would fade into the background, available for televised cutaways in his suite accompanied by a saccharine homage from Jim Nantz but little else, just like Robert Kraft of the New England Patriots.

The hierarchy of power in winning organizations is owners own, general managers generally manage, and coaches/managers coach.  Direct accountability exists at all levels, and those who fail are replaced by others who strive for excellence.  Talent is prized in a pragmatic way, and obsolescence is recognized and discarded without remorse.

Those who run their franchises thusly achieve a very meaningful point of differentiation leading to a competitive advantage.  Those who don’t, sleep well knowing they treat others with kindness and decency – while losing.

Activist owners do not win because they are incapable of creating an environment where excellence is the chief attribute because an oilman, internet billionaire, or real estate mogul is incapable of recognizing the athletic, behavioral, and intellectual traits necessary for great success in football.  It’s no less ludicrous to expect a genius businessman to become a football savant than it is a football coach to become a billionaire oilman.

The Cowboys have had six head coaches and seven starting quarterbacks since 1997, and have both won and lost 135 games.  They have had one owner and general manager.  You tell me who’s to blame.