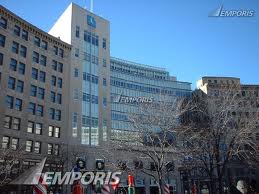 The Emmis Building houses four radio stations, a radio network, a magazine, and the Emmis corporate headquarters. It looks like a palace because it is a palace.

The Emmis Building opened 15 years ago today, and there have been a lot of great moments on and off air that have made that an incredibly cool place to work since that day in 1998 when the difficult-to-produce-under-the-best-of-circumstances WIBC Radiothon was the first broadcast from the showcase studio.

So many people and so many memories.  These are my top ten:

General manager Tom Severino and program director Jon Quick thought it would be funny in 2000 to tape a sign to the proximity card reader that allowed people to exit the parking garage that read, “Please say your name followed by the word ‘Open’ to use our new audio recognition gate operation system.”  Of course, there was no voice recognition system, and the gate didn’t respond to the yelling as Tom, Jon, and I hid around the corner laughing.  Some used their cards as always when the system didn’t work.  Traffic director Trish Boone ignored the sign completely, and exited without issue.  An Indianapolis Monthly editor irately screamed his name again and again until the garage manager was forced to come to his rescue.  When he saw the

This is the actual sign that was taped over the card reader.  All of it of course is nonsense.  That people believed there was such a thing as the Emmis Audio Activation Team speaks to their trust in the company.

sign, the manager was not amused.  Tom emerged from the shadows to explain, and the manager said, “Well, I’m glad you think it’s funny.  I’m going to call the person in charge.”  That person, of course, was Tom.

I enjoyed all of the meetings in Tom’s office with Tom and Jon equally.  They were all the same.  I played with the Slinky that Tom kept on his little conference table while Tom and Jon argued while representing the exact same viewpoint.  It went on until the amusement of the spectacle ceased, and then I told them they were saying the same thing.  Meeting over – back to work.

WNAP talent Brian Casey enjoyed the occasional sauna in the fitness area in the basement, and once he laid a towel over the rocks.  The towel ignited, and then the wooden walls caught fire.  Brian ran nude in the basement as he hysterically tried to figure out how to extinguish the blaze.  The security guys recorded the mayhem, and I regret I don’t have a copy to share.

Dave “the King” Wilson is one of the best storytellers in radio since Jean Shepherd, and I always looked forward to our meetings because it was never hard to get Dave to share a great one from his days on the road as a stand-up comic.  My favorite was from a Redd Foxx lounge show in Vegas.  The band played him on stage with the theme from ‘Sanford & Son’, Foxx limped out, looked at the audience of 12, and barked, “12 people? I ain’t playing for no 12 f**king people.”  The band played him off to the theme from ‘Sanford & Son.’  Dave tells that story and every other with more grace and glee than I’m capable of.

Eric Wunnenberg is the sales manager for 1070 the Fan, and five years ago, I bragged to him that I was the fastest runner over the age of 40 in the world.  After several minutes of disagreement, we decided that a race was the only way to settle the argument.  As you might guess, despite Eric’s advanced level of fitness, I blistered him.  Eric continues to use the alibi of wearing dress shoes to explain his defeat.  The offer to race him in the footwear of his choosing still stands.

Greg Garrison is a gifted orator.  During those shows when politics aren’t at issue, he can be exceptionally eloquent.  The day after the 9/11 tragedy, Greg delivered what I consider to be the absolute gold standard of monologues on what happened and how people should respond.  He was brilliant on that day and many others.  I wish the show was always stripped of rancor and divisiveness so more would hear Greg do what he does better than anyone.

Speaking of 9/11, the morning of the attacks, I was at my desk listening to the Morning News with Jeff Pigeon, Terri Stacy, and Steve Simpson when Pidge mentioned reports of a plane crashing into the World Trade Center.  I thought it was simply a matter of bad luck for an inexperienced pilot of a Cessna who couldn’t avoid flying into what he looked at.  Then we heard that it was a commercial airline, and I still thought it was because of poor piloting or more likely a sick one.  I ran down to the studio in time to see the second plane crash.  At Noon that day, Steve and I stood on the fourth floor patio looking at a clear sky completely vacant of air traffic.  It was eerie and awful, but reminded us of  what WIBC does best – serve as an informational touchpoint for Indianapolis.

Celebrities stop by the building periodically, and I remember walking down the hall and glancing at the guy who was passing in the opposite direction.  I thought, “Hey, that’s Jim Palmer!”  I stopped, turned, and shouted “Hey, you’re Jim Palmer!”  He turned around and said that he was indeed Jim Palmer.  Palmer enjoyed a Hall of Fame pitching career with the Baltimore Orioles, and it was an unexpected thrill to see him walking through our halls.

The parties that heralded the grand opening of the Emmis Building were phenomenal, and culminated in a free downtown concert by Kool & the Gang and Rod Stewart.  My wife and I were lucky enough to ride on the bus to the show with Emmis owner Jeff Smulyan, and I knew that Jeff would have access to whatever areas he wanted, so we stuck close to him.  Sure enough, Jeff welcomed us backstage.  As Stewart was on stage, Colts players Ken Dilger, Adam Meadows, and Peyton Manning came to the edge of the public area.  Ken yelled at me, and made a gesture that he and his teammates would like to join us.  I put my arm around the security guard and told him that Ken, Adam, and Peyton were okay.  Morphing from meaningless middle manager to gatekeeper for backstage access is the kind of thing that happens to me a lot.  I’m not great at sneaking swag for myself, but I’m hell at getting it for others.

Every Saturday I get to spend with Chris Hagan hosting “Ahead of the Curve” on 1070 the Fan.