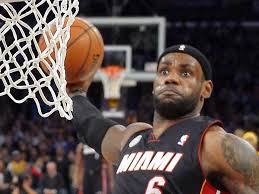 LeBron James does not look like a man ready to share the spotlight tonight during the Pacers vs. Heat tilt.

A tweaked ankle is not going to keep LeBron James from playing tonight against Paul George and the Indiana Pacers.

James is the best basketball player on the planet, and as good as anyone who has ever played the game.  He’s also incredibly durable, having missed only ten games in 11 seasons.

As the national media hones its focus on the game tonight, James will take full advantage in making certain the pundits are talking about him.  Stars love being the focus, and while George might be able to battle James to an occasional draw on the court, in the media LeBron is truly “King” James.

Not only will ESPN’s Sage Steele, Tim Legler, and Chris Broussard yap about James ankle all day during live shots from Miami instead of anything Pacers/George related, this ankle narrative will be all that NBA fans are talking about today.

That attention sells, shoes, headphones, Gatorade, McDonalds, and Coke, and is the reason why James is so valuable as an endorser.  He not only knows how to draw the spotlight, like Michael Jordan before him James pays it off too.

The Pacers have been the media darlings of the first quarter of the 2013-2014 regular season, winning their first nine and 16 of their first 17 games.  They do it with a team first attitude and vibe, exemplified by Paul George asking that ESPN interview the entire starting five plus coach Frank Vogel on the Sunday Conversation.

Every person who is great at anything takes challenges personally, and James has seen the Pacers intrusion upon his airtime and the team’s superior record as a threat.

Today’s hysteria over a tweaked ankle is a reminder to George that he is still the King, and that all this bluster about George being an MVP candidate needs to come over the top of a candidate as the best player of all time.  James is not going to willingly accommodate George’s ascension into a position that challenges James’ legacy.

It’s one thing for Paul George to become good – to be the best player on the Pacers, to be an NBA All-Star.  Raw athleticism, dynamic physical attributes, and a tireless work ethic can get a player there, but to earn a spot on the top of the mountain takes an almost sociopathic drive, shrewd guile, and mad daily search for challenges.

Being the best requires an acceptance that he will stand peerless, above friends, above family, and utterly alone.  Not everyone is built for that kind of life.  Wilt Chamberlain was.  Michael Jordan was.  LeBron James is.

A tweaked ankle?  Today’s coverage and tonight’s game are warning shot to George that as he climbs the mountain toward the rarified level of the best all-around player in the NBA conversation, there is very little air and less space.  James has no interest in allowing George to enjoy more than the provisions he decides are appropriate for the 23 year-old.

To get to the top of the mountain, George is going to have to knock James off.

James saying, “tweaked ankle” and “it’s 50-50 whether I play” are all about showing the Pacers that the bright lights shine on the Heat and away from the Pacers when he decides they should.

Playing well tonight shows the Pacers and the country that he’s not only the best, but also the toughest player in the NBA, and that’s exactly how James likes it.

And James takes what he likes.

3 thoughts on “Indiana Pacers vs. Miami Heat – LeBron James Will Play and Try to Teach Youngster Paul George a Lesson”