Click here to listen to Jeff Christiansen talk about how to play quarterback, and who the best technicians are 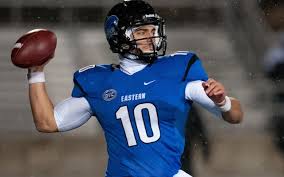 Jimmy Garappolo is one of the best known pupils of quarterback trainer Jeff Christiansen.

To hear that throwing a football has little to do with his arm from someone who knows what he’s talking about is a shock, but the arm’s uselessness – other than as a connector from the rotator cuff to the hand – is the consistent message of those who teach precision movement in basketball, baseball, and even golf.  Kickers I’ve spoken to never talk about their leg as the reason for success or failure either.

Jeff Christiansen played quarterback in the NFL, learned what others did to succeed, and is now sharing his wisdom in the Chicagoland area at Throw It Deep Quarterback and Receiver Training Academy.

When I took golf lessons, the pro, a patient teacher named Jeff Escott told me that I swung with my arms.  The look on my face conveyed a contrary message – specifically that my hands hold the club, and they are attached to my arms, so yeah, I swing with my arms.

The pro took pity on me and explained that the arms and then hands is not where the connection ends.  The arms move because the chest moves, so the pivot of the chest as initiated by the legs and hips is the power plant for the arms, and if the chest moves correctly the arms will move correctly.  Moving the arms screws up the fluidity of the swing.

As soon as Christiansen started talking about the keys to throwing a football at the college and professional level, I heard the voice of the pro who had opened my eyes to what a better golf swing might look like.

The message from Christiansen was that the arm follows the rest of the body, and specifically the feet.  I heard Mr, Miyogi from The Karate Kid when Christiansen spoke, “Balance good, karate good. Everything good. Balance bad, better pack up, go home. Understand?”

Tom Nordland is a well respected teacher of shooting a basketball, and he talks about the power of a shot coming from the legs, not the arms.  To shoot a basketball with accuracy, the arm and hand need to be relaxed.

You probably have never heard of Garoppolo, but he’s projected anywhere from the late second to the fourth round of the draft – similar to much better known prospects like Alabama’s A.J. McCarron and LSU’s Zach Mettenberger.

Christiansen told Garoppolo as a sophomore in college that he would be a starting quarterback in the NFL, and so far he’s right on track.

It’s always fascinating to talk to people who know more than we do about those things in which we have great interest, and the mechanics that separate a quarterback like the Colts Andrew Luck and Tim Tebow was a great way to spend the better part of an hour before the show and the ten minutes Fox 59’s Chris Hagan and I spent talking with Jeff on 1070 the Fan gave all of us a much better idea of how the position of quarterback is played.

If I were Tebow, I would accept that nothing to this point has worked, and I would take the chance the Christiansen is right when he says he could get him right in six weeks.  What does he have to lose>