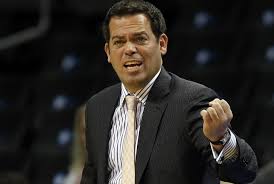 Two very important rules of business – never lie about credentials, and never wear a white tie with a striped shirt.

You remember George O’Leary, right?  In 2001, he left Georgia Tech for his dream job as the head football coach at the University of Notre Dame.  A little fact checking was done, and O’Leary was a goner.

O’Leary claimed to have received a degree at “SUNY – Stony Brook University” – an unfortunate and nonexistent amalgam of two universities, and to have earned three letters in football at the University of New Hampshire when he had not played in a single game.

Steve Masiello was the head basketball coach at Manhattan, and because of the Jaspers played well enough this season to qualify for the NCAA Tournament and push defending championship Louisville to the brink before succumbing in their opening round game, South Florida came calling with a $1-million per for five years deal.

The deal was done, and every appeared happy until South Florida checked with Kentucky to verify the degree Masiello claimed to have earned.  Unlike O’Leary’s claim, at least the University of Kentucky exists, but sadly whatever academic work Masiello did as a Wildcat from 1996-2000 was not deemed worthy of a degree.

While there are very few head coaches without a degree, it certainly doesn’t disqualify a guy from being a good coach.  The problem with not having a degree when you are already a coach is that continuing work need to earn one reveals the deceit, so the coach becomes trapped in his own lie until finally someone calls the registrar to check the items listed on the resume’.

At that point, the coach became a punchline.  Five million dollars is gone because Masello fell a few hours short, and figured, “Close enough!”  A dream fulfilled and crushed within the same 24 hours.

And now how in the hell can Manhattan take the guy back without looking like the stooges they were when they never checked the veracity of the documents Masiello submitted?  So, Masiello is has gone from hot shot young coach to millionaire to unemployed in less than two days.

Lies have a funny – maybe there is a better word for it than funny – way of never quite being left far enough behind to not be a small concern throughout your life.  You can bet Masiello was sweating his bed sheets wet Monday night.  It’s been reported that Masiello called the registrar at Kentucky, but the content of the conversation was not shared.  Maybe it went something like this:

So, kids, don’t lie and you get to keep the million per year, build a real resume’, and avoid listening to a lady in Kentucky talk about how her husband’s thigh bone popped through the top of his head.

Every decade or so we learn this lesson the hard way.  O’Leary bounced back and is now a very successful coach at Central Florida.  Masiello will be a coach again soon because he wins, and that helps salve the wounds a lie might cause.