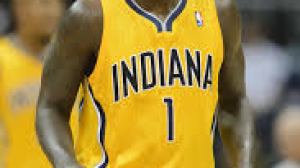 In the absence of specifics, we believe the narrative our eyes create, and what fans of the Indiana Pacers have seen over the past 32 games is a soft team that doesn’t care much for each other.

That is in direct contrast to what transpired over the first 40 games of the season when the Pacers were a happy and successful group with a gaudy record of 33-7.  Since then, the Pacers have stumbled to 18-13 – beating the bad to mediocre teams and struggling to put away the good.

Friday night against the Chicago Bulls appeared to be the night the Pacers awakened from their two-month malaise, but the following night was a train wreck in Memphis, and Monday was almost as bad.

In neither game did the Pacers manage to score 80 points, and they looked more like a first round flameout than a championship team.

Tonight is a chance to disembowel the Heat’s opportunity to net the #1 seed in the Eastern Conference for the playoffs.  According to Number Fire, a win tonight would give the Pacers an 84% chance of finishing ahead of the Heat.  A loss, and the race is a coin flip. Being up three games with 10 games to play is a hell of a lot better than a one-game lead.

Both the Pacers and Heat are tired.  Seventy games of focus and effort wear on the mind and legs, and the grind of the season gets to the very best of players.  The Heat have lost five of their last six road games, while the Pacers have lost three of four overall.

There is no doubt that the Pacers and Heat will finish one/two in the East.  On paper, this game is for nothing more than the home court in game seven should both teams earn a spot in the Eastern Conference Finals and play the first six games of that series to a tie, but those who have watched the Pacers over the past eight weeks know there is a lot more on the line than that.

All the moves Larry Bird made during a busy offseason will either begin to pay off tonight, or the entire season will be in doubt, and with that doubt will come questions about the trades that brought George Hill and Luis Scola to Indiana.  If this season is teetering on the edge of an abyss – as it seems to be – tonight would be the perfect night for the Pacers to show the resolve necessary to backpedal a few steps and regain the championship form and energy that came so easily in late 2013.

Click here to get your teeth fixed by the pro’s pro – Dr. Mike O’Neil of Today’s Dentistry

The ultimate reward for all the work the Pacers have done on the court and in the front office can be reaped only in June, but the road to a banner begins in earnest tonight at Bankers Life Fieldhouse.