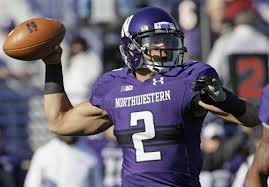 The knee-jerk reaction to the ruling by the National Labor Relations Board that Northwestern’s football players may vote to join a union that will have the authority to collectively bargain with the university for benefits is that it paves the way for all college athletes to be classified as employees.

Before anything can happen at Northwestern, the university will appeal, and while it is unlikely the ruling will be amended or overturned in favor of Northwestern, the delay will provide plenty of time for the sea change that the Ed O’Bannon lawsuit for the rights of collegiate athletes to retain ownership of their images might cause.  In fact, there are so many lawsuits and ideas being crafted into legislation that this is a tremor compared to the potential earthquakes that appear imminent.

The landscape of college sports will shift drastically over the next decade because of the smart and brave actions being taken by former Northwestern quarterback Kain Colter in this case, O’Bannon, and others like them who see the inequity of the current system.

The first piece of good news for university athletic departments is that only private universities like Northwestern are subject to NLRB rulings, so the rest of the Big Ten is unaffected by whatever changes are prompted by the resolution of the Northwestern ruling.  The second piece of good news is that the Northwestern football players seeking union representation are interested in benefits like continued health insurance for athletic injuries, and not pay for play.

The bad news is that public and legal opinion has swayed from solidly behind the ideals that have allowed college athletics to operate without paying what the NCAA has long referred to as student-athletes since the 1950s.  It bears mention that the term ‘student-athlete’ was concocted by then NCAA chief Walter Byers in response to a lawsuit in the 1950s as a dodge to avoid exactly the kind of litigation being pursued every month or two by collectives of athletes seeking a measure of fairness in the governance of collegiate athletics.

The tide is shifting toward understanding that coaches get rich, the media gets rich, administrators get rich.  Players get a scholarship.  Is the scholarship a nice perk?  Of course.  Who would rather pay for college than not?  In some families, athletics opens a financial path to college that could never have existed otherwise.  For others, the primary benefit goes to the parent(s) who are able to pocket the cash they would have spent to send the kid to school.

Forget the claptrap about amateurs thrilled by playing for the love of the game – they don’t exist.  Forget about coaches who are invested in kids getting their degrees as the primary purpose of a football or basketball program – until a coach with a losing record is retained and rewarded for the quality of the graduates he produces, none last long in this meat grinder of a business.

Don’t be distracted by the talk of $200,000 as the value of the scholarship.  The cost of tuition for an athlete is a pass through expense – and out of state tuition is an up charge.

Focus on the simple economic dynamics at work.  Value is being generated – lots and lots of value by athletes toiling for the profit, marketing, and glory of their schools – and in a capitalistic society, value is rewarded.  That’s as complex as it needs to be.

If collegiate athletics are first about education, why are coaches paid as much as $7-million per year?  Until there are professors paid to that level, something is amiss.

This isn’t about athletes saying thank you for a scholarship because their lives are better for receiving one.  It’s about athletes who are also students being able to own their likenesses, and sit at the table as an equal when the subject of their health care is discussed.

Power follows value.  That is an impossible to refute axiomatic principle.  Unique skills provide value and value brings power.  Nowhere are unique skills more obviously evaluated than in athletic endeavors.  In many businesses, a 45-year old can host meaningless meetings, write insipid and redundant memos, and head to the bar around the corner at 4:45p.  Athletes are immediately exposed in front of thousands in the stadium or arena, and millions on TV.  Regardless of whether they excel or suck, they are paid nothing but a trip to class and a plate of meatless moussaka.

The opinion of the NLRB is that Northwestern requires athletes to behave as employees, so they should be classified as employees.  Hard to refute that, or the shift in the bedrock of college football and basketball.