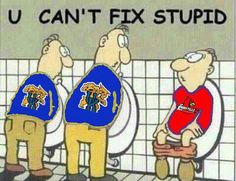 That this qualifies as humor in Kentucky is another reason to love Louisville tonight.

With every word out of John Calipari’s mouth at the Midwest Sweet Sixteen in Indianapolis, I lost more faith in humanity.  During a time when honesty matters less and less in government and business, Calipari is setting a course for the sub-basement where truth is not acknowledged as a concept.

His assessments of his predilection for one-and-done players and whether their draft status after one year is foreseeable was ludicrous.  The role academics plays for those athletes was laughable.  Calipari can crow about grades all he wants, but logic takes reasonable people toward a different conclusion about the focus on studies for people who know that whether or not they attend Intro to Sociology classes they will make millions in six months.

I have no problem with Kentucky being what it is – a de facto NBDL franchise that excels at attracting players who likely would have been drafted in the same position a year before if NBA rules allowed 18-year olds to be drafted, but Calipari should proudly represent what he has built instead of pretending Kentucky hoops has anything to do with the University of Kentucky other than as a marketing arm.

Calipari is not the only guy trolling for one-and-dines, but because of his success in luring them to Lexington, he has become the poster boy for the dubious practice.  Hell, Indiana welcomed Noah Vonleh last season – a kid who re-clssed in high school so he would be able to enter the draft that should have immediately followed his graduation from high school.

Louisville is different, and has always been different.  Whether coached by Denny Crum or Rick Pitino, they have always achieved greatness without the pedigree Kentucky fans point to with such pride, despite decades of deceit and NCAA tariffs.  To Calipari’s credit, his Kentucky teams have not been cited for a serious violation, but whether that credit is because there have been no violations or Calipari is very adept at distancing the program from skullduggery is a worthy debate.

Louisville has never had a one-and-done play, and only one two-and-done has left the program to be drafted – Samaki Walker in 1996.  Calipari has seen 11 players come and go in under a year from Lexington in just four drafts.  Add the three projected in mock drafts for this year (Andrew Harrison, Julius Randle, and James Young), and answering how an eight month stint at UK fulfills the promise a university extends to athletes like those 14 who are responsible for generating untold millions is for more conveniently pliable minds than mine to explain.

If college basketball is going to serve as a minor league for the NBA, and Kentucky is going to employ pros-in-waiting year after year to hang the banner the school holds so dear, the last that should be done is pay them.  Not that agents and boosters slinging a little cash to players and their families is beyond the imagination or historical experience of those close to college basketball, and not just at Kentucky.

Tonight, as Louisville plays Kentucky, the stakes won’t simply be for commonwealth bragging rights, but as an endorsement of either a morally vacuous philosophy of win-by-any-means basketball, or the virtues of attracting young men intent on earning a degree while they learn about overcoming the adversity that only high-end athletics can provide.

This post is for those of you outside the state of Kentucky who need a little context to make a decision about whether to wear blue or red tonight.  Wear red if you are pure of heart and hope that good will find a way to be rewarded.  Blue is for those of you who admire Richard Nixon and think Bernie Madoff was wrongfully convicted.