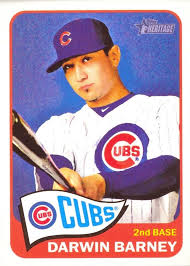 There is no reason better to mourn the fate of the 2014 Cubs than the continued hope that Darwin Barney will magically become offensively competent.

When I was a kid, I remember feeling good about an infield of Steve Ontiveros, Ivan DeJesus, Manny Trillo, and Bill Buckner.  The 1977 Cubs were worthy of hope – at least through 70 games before a mind bogglingly abrupt collapse.

My Dad laughed at me when I waxed rhapsodic about a pitching rotation of Rick Reuschel, Ray Burris, Bill Bonham, and Mike Krukow.  Actually, he gave me that “you should know better” look that kids who growing up Cubs fans have seen over and over again since the Earth cooled.

I took the train to Wrigley Field several times that summer with Nick Anson, and loved every minute.  This was back in the day when parents thought nothing of a couple of kids hopping on the Northwestern in Lake Bluff, switching to the Howard at Davis Street, and walking a block west from the Addison stop to the ballpark that in 2014 celebrates its first century of hosting an unending parade of ultimately disappointed fans.

In 1982, I thought the Cubs would finally get over the hump when Bump Wills led off the season with a home run in Cincinnati as the Cubs eked out a 3-2 win.  That I allowed for a moment just a tiny window of hope (there’s that word again) for a team that trotted out Doug Bird as its opening day starter speaks either to my enormous capacity for optimism or remarkable stupidity.  You decide which.

If the 1977 rotation was incapable of winning more than it lost, what the hell did I think was going to happen with Bird, 39-year old Fergie Jenkins, Dickie Noles, Randy Martz, and Allen Ripley?  Again, a call to my Dad should have been a wake-up call.  He grudgingly indulged my whimsical belief that at some point the Cubs would win, and then said, “Allen Ripley, Kent.  Allen Ripley.”

With the Cubs 0-0, and a front office that at least made an effort to improve the roster, Opening Day was as good as it got throughout my youth and well into adulthood.

The misery of kids raised as Cubs fans in 2014 must be incalculable.  The kindly knowing glances from fathers who knew better in the 1970s have been replaced with a light smack to the back of the head and a stern, “Are you out of your mind!” admonition.

The Cubs starting rotation in 2014 is slated to be (career won-loss mark in parentheses) Jeff Samardzija (29-35), Edwin Jackson (78-89), Travis Wood (26-35), Jason Hammel (49-59), and Carlos Villanueva (40-43).  The likely trade of Samardzija before the July 31st deadline certainly won’t help, and neither will the best players in the organization opening the season in Iowa and West Tennessee.

There is no rational justification for hope this season as the brilliant ownership of Tom Ricketts prefers to avoid spending the cash necessary to improve the roster until the farm system starts sending talent north, but the Cubs don’t want to start the kids’ major league clock until the team has a chance to win.  If this sounds like a consciously implemented cycle of doom that’s because it is.

Click here to stop procrastinating and take great care of your teeth – make an appointment today with Dr. Mike O’Neil.

The Cubs have lost a lot over the years, but even during the strange odyssey of the college of coaches in the early 1960s, they were trying to win. In 2014, everyone knows there is not only a zero probability of playing in the postseason, there isn’t even a pretense of effort being made to compete.  Meanwhile ticket prices will again be among the highest in the game.  Maybe fans can enjoy the antics of the new mascot that ironically bears my Father’s name “Clark” – a cruel twist that would have resulted in a stern letter and maybe a cease and desist notice were Dad still alive and seething.

The past two and three year runs were the losingest in the history of Cubs baseball, and the message from Ricketts, team president Theo Epstein, and general manager Jed Hoyer is a resoundingly limp, “Help is on the way – in 2016!”  The greed and arrogance of this group should bring only two responses – the sadness of lost hope for children who haven’t seen enough to know better, and a refusal to pay top level major league prices for bargain basement baseball.