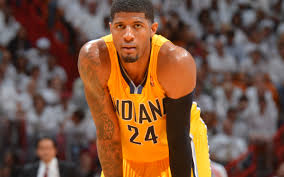 Paul George’s 23 year-old legs should be able to bounce back quickly with just a little rest.

Legs provide the power.  Arms and hands serve as the guidance system.  That’s a very basic schematic for how a basketball is shot accurately.  When the legs are tired, arms and hands bridge the power gap, and precision suffers.

Strong legs are the key to making shots, and the Indiana Pacers have not made shots during the recent five losses in six games stretch.

During the preseason, the Pacers workouts were awesome.  I don’t use that word like a 12-year old for whom everything in the world is “awesome!”  The effort given throughout was almost game speed, and I was amazed.

The first preseason game against the Bulls was a flat-out war.  It was a much better game with significantly improved effort than any I had seen from 2007-2011 when the majority of the fans who showed up for the games spent most of their time in the bars throughout the Fieldhouse instead of watching the “action.”

Nothing changed through the beginning of this season – hard work at practice, and tenacity in the games were the rule.  Off to a 33-7 start, the Pacers appeared to be the dominant team in the NBA who might just win the franchise its first ever NBA Championship.

And then the bottom fell out, or so fans thought.  Since the January 20th 102-94 win at Golden State, the Pacers are 19-16, but worse – they have lost five of their last six while scoring more than 78 points only during the lone win against the Miami Heat.

Fans are ascribing the fall to all sorts of extraneous stuff – the Danny Granger for Evan Turner trade, Andrew Bynum’s signing, Paul George’s appearance on Jimmy Kimmel, and Lance Stephenson’s all-star snub among them.

The truth is like much less interesting.  The endless work and passionate dedication to winning a championship has sapped the strength from the Pacers legs.  Including the preseason, the Pacers have already played 83 games, including 18 in March, during which there were five back-to-back games on consecutive nights.

If you want a reason for the struggles the Pacers have endured, field goal percentage is the most profound factor.  Hit nearly 50%, and you win a lot of games.  Hit 36.8%, and get used to losing.

Even worse, the Pacers have allowed their opponents to hit 43.6% of their shots over the last six games, while restricting the victims during the five-game winning streak cited above to a field goal percentage of 39.3%.

There is a lot that goes on to affect field goal percentage than legs – sharing the ball, setting good screens, making good decisions with the ball, and passing accurately to a shooter, but there is nothing like tired legs to simultaneously make all of those things difficult.

Paul George, David West, Luis Scola, and Roy Hibbert have played all 75 games, and even more importantly, all of these guys give an honest days work in practice and in their own workouts.

So is there hope that the Pacers will recapture their mojo, and ability to knock down shots?  Sure there is.  Remember the end of the 2012-2013 season when the Pacers limped into the playoffs, losers of five of their last six games.

The Pacers will not play another back-to-back through however long their run in the playoffs last.  Beginning with today’s day off, the Pacers will enjoy one, one, one, two, one, and two days off between games through the end of the regular season.  Four of their final seven games are against losing teams, and not just losing teams, but bad losing teams like Detroit, Atlanta, Milwaukee. and Orlando.

It’s a good bet the Pacers will get stronger throughout the remainder of the regular season, and continue to thrive in the postseason.  Whether that means they will be able to finally wrest home court from the Heat is what will likely determine their success in the Eastern Conference Finals.  At least I hope the series goes seven, if all the games are like the last Pacers/Heat war on March 26th.

If we knew the answer to how this will end, what fun would that be?  That’s why we watch.