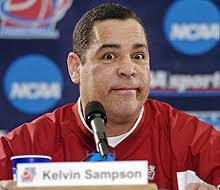 Well, it’s good to know that the University of Houston is so concerned about winning that a coach whose arrogance and stupidity ruined the Indiana University basketball program is their best option.

Sampson was ousted at Indiana in February, 2008, for making impermissible phone calls that were facilitated by assistant stooge Rob Senderoff.  That series of violations came on the heels of violations for the exact same thing at the University of Oklahoma when Sampson ran that program.

There is no doubt that Sampson can win games as a head coach, but the overriding message to the players he has coached is that rules are for boobs, and winning trumps all.  Nice piece of guidance there.

When Houston AD Mack Rhodes was hired in 2009, university president Renu Khator said, “Winning games is important, but helping young people be winners in the game of life is essential.”  Who better to teach them that than a coach who continues cashing checks despite being one of the worst violators in NCAA history.

With Sampson’s hire, Houston is confirming that people who claim “cheaters never win” are idealistic and naive.  Sampson now has a five-year contract that proves they do win, and Senderoff is the head coach at Kent State.  Where is Dakich, who has never broken a rule, and cleaned up Indiana’s post-Sampson mess?  He’s hosting a radio show in Indianapolis and doing great work as an ESPN analyst.

Young adults looking for leadership and guidance get a heavy dose of amorality from Sampson and Senderoff while Dakich entertains sports fans with unique perspective.  Dakich got the best of the deal, but the schools who are supposed to hire men that students can look up to are failing while TV programmers succeed.  Pathetic.

Former Indiana Athletic Director Rick Greenspan made the inane call to hire Sampson eight years ago, although it has always been rumored that former IU President Adam Herbert mandated that choice.  Either way, you will notice that both men’s names are preceded by the word “former”.

Sampson is 58-years old, and it would seem likely that six seasons away from college basketball has been a daily reminder that flouting the rules is no way to sustain a career in college coaching.  It’s not like Sampson missed many paychecks as an assistant coach for the Milwaukee Bucks and then Houston Rockets, but people thought he learned his lesson when penalized at Oklahoma too.

“How dumb would Sampson be to cheat at Indiana after cheating at Oklahoma?” was the question asked when Sampson was hired to rescue the Hoosiers from the incompetent clutches of Mike Davis.  People knew the definitive answer to that question two years hence.

Fans and media in Houston are asking whether Sampson could be so incredibly moronic as to violate NCAA rules yet a third time.  Fortunately for Sampson, the rules for contacting recruits have been modified, so they are more logical, and easier to understand and follow.  That will make engaging in subsequent violations more difficult, but where arrogance meets dumb, there is always a way.

Indiana Hoosiers Basketball’s course was forever affected my a man who appears to have emerged from disgrace mostly unscathed.  Now, another school is trusting him to avoid scandal.  I wish the University of Houston luck with that.

Fathers can now take sons to see the Cougars, point to Sampson, and say, “See that man?  He’s proving everyday that rules and morality don’t matter a damn as long as you win.  Remember that, son.”

Solid message for an institution purportedly dedicated to higher learning to advance by hiring an unrepentant program wrecker.

The coach who is a walking and talking plea for the NCAA’s need to enact a lifetime ban on relentless cheaters is back in the game, and Rhodes better say his prayers at night that Sampson has learned his lesson – finally.