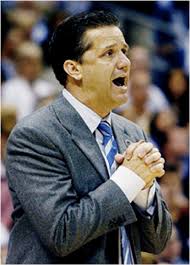 “Kent, can you ever forgive the things I thought about you? How can I hate a guy whose name starts with K-E-N-T?”

Okay, Cal, I forgive you. Let’s get a smoothie!”

University presidents have made the NCAA so completely useless that they have created an alliance of two people normally at total odds about college athletics – Kentucky basketball coach John Calipari and me.  Calipari makes so much sense in his new book, “Players First: Coaching From the Inside Out” that I may drive to Lexington to make peace and buy him a smoothie.

According to the Wall Street Journal’s synopsis of the book (to be released April 15th), Calipari offers a 13-point plan to resolve some low-hanging fruit issues that keep schools from financially benefitting anyone but themselves, coaches, and administrators.

I am so in lockstep with Calipari that I would swear he’s a fan of this site if not for the strident and caustic posts I’ve written that have repeatedly ripped him for being the embodiment of all that is self-serving about big time college coach/millionaires.

Among his excellent ideas in the chapter titled “At War? Common Sense Versus the NCAA”:

Calipari also recommends allowing families to purchase championship rings and stay in the same hotels as the players during the NCAA Tournament.  Not only did I never know those weren’t allowed, I have no idea how the NCAA could stop such things from happening.  If I want to stay in the same hotel as my son, I’m booking a room.  Why the NCAA might object will need to be explained to me, although they might want to save their time and mine.  Their illogic only frustrates me.

In the book, Calipari compares the NCAA to the Soviet Union in that its inability to evolve guarantees its own obsolescence and demise.  The only change I would make is to clarify that NCAA president Mark Emmert would like to implement some of the same initiatives that Calipari recommends, but membership approves all rule changes.  University presidents run things, not Emmert.

People tend to blame the NCAA as though the bad ideas and archaic notions of amateurism emanate from Indianapolis, rather than the bureaucrats who run from any changes that might adversely affect their bottom line in a way their boards of trustees might object.

But the ideas are stellar.  Kids should be allowed access to legal opinions.  Who could see the logic of a destitute kid about to become a millionaire being banned from seeking advice?  It’s ridiculous.

I would add two ideas to Calipari’s fine list – scholarships should extend for the life of the athlete, if he or she leaves the university in good standing; and health coverage for injuries sustained during collegiate competition or school sanctioned and supervised work survives long past the life of the scholarship.

It’s possible that those notions are included in the book, but not in the Wall Street Journal synopsis of the book.

The concept of sharing ideology with a guy I have reviled for so long can either be seen as a sign that even the most virulent opponents can find common ground, or that one or the other needs to seriously examine his belief system.

I can either be an intractable opponent like Joseph Stalin, or accept the concept of agreeing with a sworn enemy as Mikhail Gorbachev did.  What a minute, why am I the Soviet guy?  Calipari can be the Russky.  I get to be Kennedy or Reagan.

Either way, this book is a step toward detente.

5 thoughts on “In “Players First: Coaching From the Inside Out”, Kentucky Basketball coach John Calipari agrees completely with Kent Sterling”