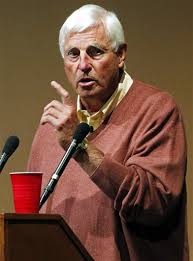 Bob Knight’s combination is funny, arrogant, and volatile. The sense that anything can happen still sells tickets to his appearances.

After seeing Bob Knight speak a half dozen times, I’ve had enough.  His combination of dime store wisdom, truly entertaining/hilarious anecdotes, and arrogant vitriol stopped captivating me long ago.

As you might guess, I won’t be in attendance at the Carmel Center for the Performing Arts tonight as Knight blasts the current state of everything, talks about how nothing is as good as it used to be, and no one is as smart as he is.

If you have never seen Knight speak, I recommend that you buy a ticket and listen to the stories, tolerate the self-righteous blather, and learn from the lessons that are relevant.  That I won’t take the time to listen – again – shouldn’t be inferred as a rebuke of his gifts as a speaker.

While Knight is no longer coaching, his understanding of basketball dwarfs all but a very few in the history of the game.  His understanding of human behavior is wildly off target.  Those who applaud him are tolerated.  All others can kiss his ass.

Knight will be in hog heaven tonight as he is greeted by a standing ovation from sycophants eager to lap up every word that spills from his lips.  People who don’t worship Knight tend to stay home because they are too smart to pay for 90 minutes of anger inducing diatribes.

Part of the fun of listening to Knight is that he is the public speaking equivalent of MTV’s “Jackass”, the show that celebrates those who do what others would never dare.  Knight shocks and awes throughout his appearances with stories, lessons, and language that bring laughter – some genuine and some nervous.

The question and answer portion will bring the inevitable request for a critique of the current state of the Indiana program, which he will either choose to dismiss or deride, and the request for him to return to coaching, “College basketball needs you!  Those players need a disciplinarian!”  His will sound like it was written by Aaron Sorkin for Colonel Nathan Jessup in “A Few Good Men.”

There will be tension as someone tries to get bold and question one of Knight’s strange episodes of misbehavior and the crowd will murmur nervously as he pauses, glaring at his inquisitor as he has thousands of times before.  There is nothing quite so dramatic as a Bob Knight glare.  Then, he’ll either unload on the poor sap, break the tension with some not-so-gentle mockery, or praise the person for being brash enough to ask the question – likely a combination of the three.

Someone might ask Knight about Kentucky and John Calipari.  If so, Knight’s bare knuckle response will wind up on Sportscenter.

Whatever happens tonight in Carmel, it will not be pre-scripted.  Knight isn’t paid to be smooth.  He is a verbal gunslinger who enjoys amusing himself in front of a crowd.  His name sells the tickets in Indiana, not the content.

Knight will be inflammatory, self-indulgent, funny, and off-color.  It will be entertaining, maddening, confusing, and occasionally enlightening.

The audience will be reminded about what made Knight one of the most polarizing sports figures of the last half century. His ability to build a successful basketball team was beyond question, as was his lack of impulse control and need to shock.

No one I can think of in history, other than Richard Nixon and George Patton, overcame more obstacles of their own creation on their path to success.

Witnessing first hand the clash of good and bad being waged within the complicated labyrinth of Knight’s brain is worth the price of admission tonight in Carmel – unless you’ve seen it over and over again, in which case it is a tedious and exhausting exercise.