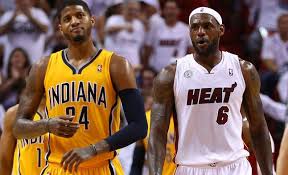 Paul George and LeBron James matchup for the fourth time this season. Winner likely gets the top seed in the East.

Indiana Pacers coach Frank “Iceman” Vogel made the call to rest his starters Wednesday night despite the Pacers training the Miami Heat by only 1/2 game for the top spot in the NBA’s Eastern Conference.  The gamble initially paid off as the subs eked out a 104-102 win in Milwaukee.

Chris Copeland’s runner with 1.2 seconds left earned Vogel’s eternal love and admiration as the difference in the win that allowed the Pacers to regain sole possession of the lead in the race for the #1 seed.

Tonight, the starters, who had appeared exhausted for weeks after starting the season like an unstoppable machine, return to try to lay a death grip on home court advantage until the NBA Finals.

The difference between earning home court and failing to do so doesn’t matter until the third series of the playoffs is tied at three, but the Pacers saw first hand how big a deal it is months ago when they were one game away from the NBA Finals, but failed to win game seven on the road against the eventual champion Heat.

There is a lot of heavy lifting to do before a rematch might be played at Bankers Life Fieldhouse in June – especially for a team that is barely a .500 team since January 20th.

Paul George, David West, Roy Hibbert, George Hill, and Lance Stephenson played a lot of basketball in March – 18 games in 31 days with 11 on the road is a good way to sap whatever energy remains in your legs after a long offseason of hard work, followed by a magical first half of the season where the Pacers outplayed everyone in the NBA to post a 33-8 record.

So Vogel took the biggest chance of his young head coaching career.  With the season on the line, he turned to Luis Scola, Donald Sloan, Evan Turner, Ian Mahinmi, and Rasual Butler to try to steal a road win against the league’s worst team while buying an uninterrupted four-day respite for a starting five who have played virtually every game this season.

It all worked perfectly due to Copeland’s offensive magic, and now phase two begins.  If the Pacers can beat the Heat, and split with the Thunder and Heat in the final two games of the season, the gamble will have paid off huge.

If the Pacers look as listless as they have in most of the other games since that 102-94 win at Golden State on January 20th, Wednesday will have been meaningless minus the fun it was to watch the Pacers mob Copeland after he hit the game winner.

It’s all right there in front of the Pacers if they can just take it.  Wednesday’s call by Vogel was either a master stroke by a genius with a cool hand, or too little too late for a roster that should have been rested more often throughout the portion of the season when they were posting double-digit wins in bunches.

The Heat are in worse shape than the Pacers with Dwyane Wade, Chris Anderson, Udonis Haslem, and Greg Oden among their barely walking wounded, and James is starting to buckle under the weight of carrying the load with only caddies Chris Bosh and Mario Chalmers able to provide meaningful help.

Whatever happens, it’s has made for great drama.  After a regular season that is too long for players, coaches, and fans, the real season starts tonight.

If the mercurial Hibbert and Stephenson like playing for Vogel, whose seat could get very hot very quickly with a poor effort tonight and in the playoffs, they need to pony up some serious team-first effort.

Should be great stuff tonight beginning at 7:30p.