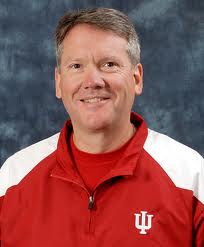 Indiana University athletic director Fred Glass is like a normal guy with a couple of exceptions – he is really smart while not believing he knows enough; he understands how fun life should be; and he has a very, very cool job that he earned through excellent performances in other very cool jobs.

It seems incredible that he has been the AD in Bloomington for five years, but he has.  The changes in the athletic department have been many, and most have gone a long way toward enhancing the student’s academic and athletic experiences.

Parents of athletes trust a university’s athletic department to shepherd a kid into adulthood, and that trust is well-placed in Glass and his staff.

Today, Glass appeared on “Ahead of the Curve” on 1070 the Fan to talk about the Cream and Crimson scrimmage, but we also discussed his thoughts on the progression of the football program, the step back taken by Tom Crean’s basketball team, and the process that will be used next month to decide whether Indianapolis, New Orleans, or Minneapolis will be granted the right by NFL owners to host the 2018 Super Bowl.

As always, Glass was upbeat and candid.