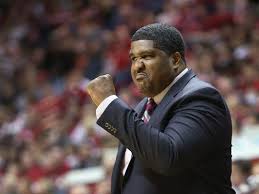 Kenny Johnson is a popular man these days.

If Indiana Basketball is in a position where losing assistant coach Kenny Johnson deals them a significant blow in courting and signing talent, then Indiana is not the program fans believe it to be.  If the state university in the middle of an area teeming with talent that has great heritage, beautiful facilities, and a commitment to winning has to rely upon a pipeline from the east coast to compete, they Hoosiers are in big trouble.

Johnson is a very popular assistant basketball coach these days.  Maryland and Louisville are supposedly courting the east coast recruiting wizard who was responsible for bringing Stanford Robinson, Troy Williams, and Noah Vonleh to Bloomington last year, and freshman Robert Johnson in the 2014 class.

Indiana is reportedly working to give Johnson a significant salary bump to compel him to reject overtures from Mark Turgeon and Rick Pitino, and remain with the Hoosiers.

Johnson’s body of work is hardly complete and judging the value of his effectiveness in attracting those three freshman is silly at this point, but the Hoosiers 17-15 record didn’t please many inside or outside the program.

Could Indiana have suffered a worse result than not qualifying for any tournaments without Johnson last season?  The 17-15 record doesn’t exactly scream for anyone to be regarded as untouchable.  If you can’t see the loss of an assistant coach from a 17-15 team as an opportunity for growth, what does that say about the overall health of the program?

In no way am I saying that Johnson can’t recruit or teach at a very high level, but based upon what evidence does Johnson represent the kind of value that demands emptying the bank to keep him?

All things being equal, an assistant coach who can lock down Indiana kids like Trey Lyles, Trevon Bluiett, Gary Harris, Glenn Robinson Jr., Mitch McGary, and Zak Irvin would provide a more sustainable talent stream than a guy plugged into Team Takeover, Boo Williams, and the rest of the east coast AAU structure.

It’s not a bad idea to poach the occasional kid from the east to plug a hole, but to build a program in the state of Indiana, where basketball is the sport of choice for the best athletes doesn’t seem like a very Hoosier thing to do – especially when John Beilein and Tom Izzo win regularly with Indiana kids.

Understanding why a Maryland native like Victor Oladipo would pledge Indiana isn’t difficult.  He was ranked #150 in his class, and was exceptionally raw.  Where Indiana was at the time, taking a chance on Oladipo made sense, and given the dearth of offers for Oladipo, his pledging IU was logical.

Building an Indiana program with talent from Virginia, Maryland, and Massachusetts isn’t sustainable if a relationship with Johnson is the only reason recruits are coming.

Johnson grew up in Maryland, graduated from Maryland, and coached in Maryland and Virginia.  That’s where he’s from, and offering him enough money to make it impossible for him to leave Indiana to return seems cruel and guarantees only a short-term reprieve from his departure anyway.

It’s not unusual for assistant coaches to bounce from program to program, and if Johnson leaves Indiana, Tom Crean will have an opportunity to hire another coach who can communicate well with players and recruit a different specific geographic area – maybe one closer to home.

Johnson has always been friendly and knowledgeable, and clearly has the ears of the players.  He seems to be a very good assistant coach, but he’s not the only one.  His leaving shouldn’t be inferred as a step back for the program or Tom Crean, but an opportunity to move ahead.