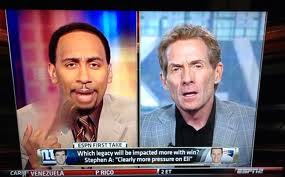 If these two guys and others like them can ruin the mood for a professional athlete, they need to remember who they are and get over it.

Everybody thinks the Pacers are either soft or gassed, and that the series against the Atlanta Hawks is going to be some intense battle to the death between an overrated flash in the pan and a tough eight seed.

That’s a load of crap or it better be.  Top seeds lose to an eight seed once in a while, but writing an epitaph for a team that only improved its roster after a run to Game Seven of the Eastern Conference Finals a year ago is ridiculous.

Talking heads, by definition, need to talk about something, and the obvious choice for a topic is why a team that started 33-7 finished 23-19.  Oh the answers they came up with.  For media guys, they sure sounded like psychologists.  Roy Hibbert is too sensitive, and Paul is embarrassed by the sexual dalliances in which he became embroiled.  The Danny Granger trade lanced a trusted friend from the roster, and Andrew Bynum’s signing sent a confusing message to Hibbert.

It’s a miracle the Pacers had the emotional fortitude to leave their homes!  The courage it must take for Roy Hibbert to shoot a basketball, knowing there is a chance his fragile psyche could wilt if he misses.

All those issues might affect eight-year olds playing for a CYO team, but for grown men making millions to play basketball in front of 18,000 rabid adults and high strung kids dealing with soap opera chatter should be simple.  Keep the focus on what’s important and win the damn game.

The Pacers aren’t playing this series against themselves.  The Hawks are going to have something to say about whether the Pacers move forward, but come on, they’re the damn Atlanta Hawks who lost more than they won, and aren’t worthy of being called a speed bump, and the Pacers know it.

To stop the Atlanta Hawks, you contain Jeff Teague, deny Kyle Korver, and limit Paul Milsap’s touches down low.  Now that we’ve gotten that out of the way, let’s talk about whether the Chicago Bulls or Washington Wizards will be next up for the Pacers in the second round.

Wait a minute.  The Pacers knew two of those things during last year’s postseason, and the Hawks took the Pacers to six games with team-wrecker Josh Smith playing aggressively 20% of the time.

This time around, the Hawks bring Paul Milsap. (Non-NBA fans should resist the impulse to wonder whether Paul is related to blind country singer Ronnie Milsap.  I haven’t tracked their genealogy, but I’m going to guess their family trees share no branches.)  For those who don’t pay close attention to the Utah Jazz, for whom Milsap played for seven years before signing with Atlanta as a free agent last July, Milsap was an efficient scorer and rebounder.

In Atlanta, Milsap changed his game.  He started shooting threes.  In the first seven years of his NBA career, Milsap attempted a total of 113 three-pointers.  This season, he took 212 threes, making 35.8%.  Pacers fans should imagine Milsap as Paul George with a much thicker, well, everything.  Milsap scores 3.8 points per game less, and grabs 1.7 rebounds more, but statistically they are more similar than I ever would have guessed.

Teague is Teague.  He loves putting a defender on his hip, using his speed to create space, and putting up floaters before the defense can close.  He’s sneaky fast and very smart.  He’s not a great outside shooter, but his scoring has improved every year of his five-year career.

Korver is a deadly accurate bomber who shoots roughly two-thirds of his shots from beyond the arc, making 47.2% of his attempts this season.  He’s a clever fellow, who knows how to find space, and isn’t such a liability on defense that he can be easily exploited.

Okay, so we talked about the Hawks.  Teague, Milsap, and Korver are serviceable players.  No offense to them.  They deserve respect.  But if the Pacers allow this Hawks team to derail their dream of a championship, they have fooled everyone in Indianapolis.  There is just no way the Hawks can muster the execution and fire needed to beat the Pacers, and if they do, then all the talking heads were right, and the Pacers are weak – weak enough to overreact to a bunch of noise made by guys paid to do nothing more than make noise.