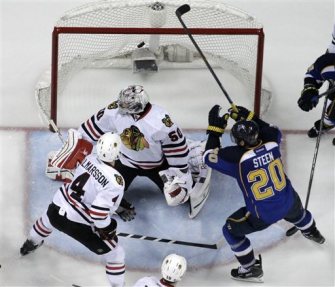 The NHL Playoffs have started and there is nothing like it. The triple overtime Game 1 Thursday night between the defending Stanley Cup Champion Chicago Blackhawks and St. Louis Blues captured everything the NHL Playoffs is all about – excitement, suspense, skill, toughness, admiration, hate, sudden death, survival, you name it.

For every cliche you can  think of to describe an athlete or a sport, it’s all there on display in playoff hockey. The oohs and aahs and overall sights and sounds of the game are just different. It’s as real as it gets in sports.

NBA die hard fans will tell you this is the best time of year. And they’re right. But for fans who follow both sports closely, they know the real reason why that is: the excitement of NHL Playoffs.

The NHL Playoffs are only two days old and already it has probably packed  more suspense and pure blood and guts excitement than the entire first round of the NBA Playoffs will. Overtime has been the norm so far and overtime playoff hockey is unmatched.

Aside from the Pacers playing a crucial Eastern Conference Finals game or NBA Finals game, there is no single NBA Playoffs game that could take me through the emotional toll the Blackhawks -Blues game did Thursday night. And it was only Game 1, Round 1. But the emotional journey felt like I had just witnessed a frustratingly glorious seven game series.  I’m not sure how the players are going to physically survive this series. I’m not sure how I’m going to emotionally survive this series. I went to bed disappointed the Blackhawks lost. But I also went to bed knowing that no Game 1, Round 1 matchup could take me on a four-and-a-half hour journey like that. Damn, I respect this game. 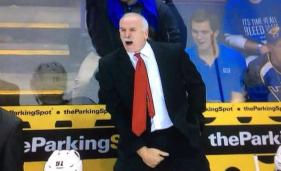 How intense did this game get? Late in the second overtime, the officials missed a crucial delay of game call on St. Louis that would have put the ‘Hawks on a five-on-three power play. After consulting with each other for a while, the officials decided no penalty had been committed. Chicago coach Joel Quenneville went nuts, if you will. Displeased with the verdict, he let them know what he thought of it. It conjured up memories of the Reggie Miller-Spike Lee exchange in Game 5 of the 1994 Pacers-Knicks series.

Some might say he let his emotions get the best of  him. I say it’s the emotion of playoff hockey, especially in series involving two extremely talented, bitter rivals. Plus, as the game approached midnight, it was nice added entertainment. It was way beyond family viewing hours, anyway.

As the second overtime ended during the Hawks-Blues game, I flipped over to CNBC to see that Colorado scored with 14 seconds to go against Minnesota to send that game to overtime. There may be one thing more exciting than overtime hockey – the suspense of a goal in the waning seconds of regulation time that forces overtime.

The Pacers start their championship quest Saturday at 7 p.m. Do yourself a favor and pre-game it by watching the Blackhawks at Blues at 3 p.m. on NBC.  I can’t promise there will be another crotch-grabbing moment, but it very well may be the best appointment viewing on the weekend sports calendar.