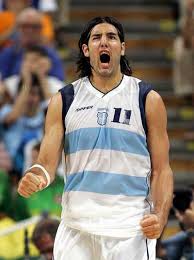 Luis Scola is a smart guy who has played a lot of important basketball on many stages. Listening to elders like Scola would be a very good idea for his younger teammates.

Since that January 20th game at Golden State, the Indiana Pacers knew where they would be on April 19.  At 33-7, the postseason was a done deal, and it would take a total collapse for the aging Miami Heat to catch them for the #1 seed.

The Pacers put it to the test by playing mediocre basketball through the second half, but it was enough to earn what they worked so hard for during the offseason – home court advantage through the Eastern Conference Finals.

Now the real work starts and we will see whether the Pacers have been able to replenish their depleted energy reserve and developed enough toughness to take out the Atlanta Hawks, an eight seed based upon their 38-44 record.

The veterans who spoke to the media today appear ready.  David West was at his loquacious best, and Luis Scola said after today’s practice that he is much happier with where the team is today than he was two weeks ago.

The tenor of the work and post-practice interviews was much more animated than yesterday, and Scola actually seemed to enjoy talking to the media.  That’s a little different from the normal tenor of the team when Larry Hawley, Chris Widlic, or one of the phalanx of Indy Star scribes who create content for Pacers quote hungry fans.

Scola spoke eloquently about how he has learned to not take for granted the opportunity that lies in front of the Pacers.  He said that ten years ago he felt the same way – that winning 50 games and going to the playoffs was assured.

It’s not hard to guess about which guys he is talking, and which of them need to get the heads clear of their behinds if the Pacers are going to contend for a championship.

After watching the “Bad Boys” 30 for 30 last night, it was clear the price that is paid for a championship is steeper than that which the Pacers have offered – at least in the days of Magic, Michael, Kareem, the Chief, Pip, Larry, and Isiah.  A deal with the devil was required to lay claim to the Larry O’Brien Trophy.  Morality was discarded, physical ailments ignored, and friendships trashed.

Nice guys didn’t necessarily finish last 25 years ago, but they sure as hell didn’t win an NBA Finals against Hall of Famers.  The Pacers have a couple of guys who would crawl across broken glass to win, but the rest are nice guys who try to say and do the right things.  That might work in 2014 during an era when the biggest and baddest player in the NBA is carried from the court by teammates because of muscle cramps.

Back to present day possibilities.  The Pacers looked a hell of a lot happier today than yesterday, and whether that happiness can be funneled into tenacity will come clear beginning tomorrow night.

The second half of the season was a pointless exercise, but tomorrow night, the games become very pointful (I’m certain that “painful” is not a word, but it I’m not sure why, so I’m stepping outside the boundaries of correctitude).  It’s been since 2004 that the expectations have been this high for the Pacers, and how they handle that will go a long way to determining their level of success.

Here’s another lesson from the past that might benefit the Pacers – if fans expectations outpace your own, you are at fault – not them.  There was never a season that Michael Jordan didn’t demand more from himself than fans did.  Letting yourself off the hook is not what champions do.

If the Pacers are able to hang a banner, they were right all along.  If not, they need to recognize like their NBA ancestors that the answer lies inside each of them, and not because of anyone else.

5 thoughts on “Indiana Pacers – Painful run-up over, it’s time to get to work in the postseason”

Leave a Reply to make up products Cancel reply