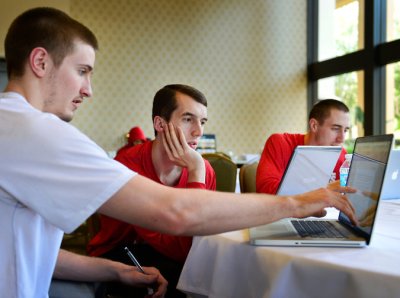 What I have always loved about Dan Dakich as a radio host is that he is not swayed by the prevailing media winds.  His perspectives on 1070 the Fan are unique and developed through experience as a player and coach, as well as animated discussions he has with himself.

Yesterday, he said something during his show that struck me as absolutely valid, but unheard from other supposed college athletic experts – that when we talk about one-and-dones being a problem, we are focusing upon 10-15 of nearly 5,000 division one participants.

Allowing those few exceptionally talented kids to define the experience of being a college athlete is one of the worst examples of profiling in our society, and discounting the role academics play in the development of the vast majority of young men playing college football and basketball is myopic and short-sighted.

It’s true that the term “student-athlete” was a contrivance advanced by then NCAA chief Walter Byers to battle a perception that players behave as employees for the universities for which they work and play, but that doesn’t mean that they are any less dedicated to earning their degrees.

Sure, there are exceptions at schools where shadow classes are commonplace and tutors earn the grades given to athletes who are admitted to universities for the sole purpose of competing (because of Mary Willingham’s brave honesty, the only one we can be sure of is North Carolina), and it’s right and proper to talk about them.  When the only compensation available to young men responsible for generating millions of dollars for universities is academic, they should be able and required to accept it.

That those rogue outfits are allowed to define the big school experience, something is amiss.  Dan’s son Andrew attends Michigan and plays basketball.  He is inside the room at study tables, and knows with certainty what the academic load is for the Wolverines.  At Indiana, when you talk to the athletes and administrators, you can see the pride they take in course load and classroom accomplishment.

At Butler, Brad Stevens held practice at 6:00 a.m. to accommodate the class schedules of his basketball players.  Meaningful degrees are earned as the players make great use of the scholarship they were awarded because of their talents.

My son played at Loyola-Chicago, and he along with several others on the team were recognized for their academic excellence.  They all attended study tables, and were held to a high standard of academic performance – which was good because winning regularly was not in the cards as their reward.

There isn’t much sex appeal in talking about success stories, so ESPN spends an inordinate amount of time describing the term “student-athlete” as a canard, a prevarication – a lie.  It isn’t.  There are many more student-athletes than future pros, but tales of kids in libraries preparing diligently for a test aren’t very interesting, so the focus shifts to the outliers who do what’s needed to stay eligible while they audition for the NBA or NFL.

Most D-1 football and basketball players enter college believing they have a chance to chase their dream of earning millions as they continue to play a game they love, but a vast majority of them understand the great value of an education – even if gaining it through the grind of attending class and study table is a pain in the ass.

Click here to fix your teeth in pain-free comfort at Today’s Dentistry in Fishers, Indiana

Athletes deserve to be compensated for the real dollar value and marketing heft they bring to the universities they attend, but in no way does that mean the education and degree they garner should be discounted.  Coaches are paid as much as $10 million per year for their work as educators, so paying students as employees doesn’t seem to be as wretched an idea or the violation of amateur principles as many claim.

Indianapolis is very fortunate to have a host like Dan who has been there, done that, and seen how academics and athletics can mesh at those many schools where the right things are done.  College football and basketball are defined in the media by their occasional scandals.  That not only inaccurate, but unfair to the schools and student-athletes who do it right.

One thought on “NCAA Football and Basketball – “Student-Athletes” do exist, and there are more of them than you think”