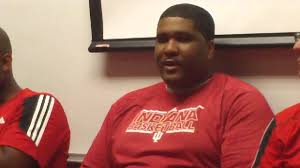 Assistant coach Kenny Johnson is off to Louisville, and it might be the best thing that could have happened for Tom Crean and the Hoosiers.

Kenny Johnson decided to chase cash 90 minutes south of Bloomington at the University of Louisville, and the pipeline to solid east coast recruits likely went with him.

So far, Indiana has a 17-15 record and no trip to the NCAA or NIT to show for Johnson’s influx of players from the east, so concern over his departure should be minimal.

Nothing wrong with a guy selling his services to the highest bidder or chasing greater likelihood of bouncing into a head coaching gig from a team that regularly goes to the NCAA Tournament.  And there is also nothing wrong with Tom Crean seeing this as an opportunity to upgrade the staff with someone who can recruit Indiana and bordering states at a more productive rate.

If Indiana is an elite program, as is so often claimed, it needs to start grabbing the best players from Ohio and Michigan, rather than having top Indiana kids poached.  Losing an assistant from a staff that authored mediocrity can provide a chance to keep the best and brightest closer to home.  If Indiana can’t recruit Indiana, Indiana can’t win.

Johnson was a productive recruiter who was responsible for bringing in Noah Vonleh, Stanford Robinson, Troy Williams, and incoming freshman Robert Johnson.  Vonleh is gone to the NBA, and the other three are mostly unknowns in terms of what they will bring to the Hoosiers in the 2014-2015 season.

Click here to call the best dentist in Indianapolis your own – Dr. Mike O’Neil of Today’s Dentistry

Nothing wrong with kids from the east, and Robinson, Williams, and Johnson might be all time greats at IU, but Crean must win the battle for in-state kids.  The Hoosiers brand must be dominant close to home if Indiana is going to succeed long term.

If the result of Johnson leaving is hiring a new assistant who can dominate Indiana, today might have be remembered as very good for the Hoosiers.