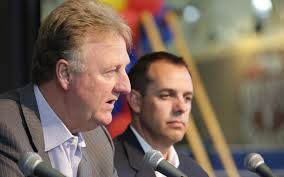 Larry Bird and Frank Vogel know what the problem is, but can they get it fixed in time to give the Pacers a chance to get past the Atlant Hawks.

Basketball is an easy game.  If offensive efficiency drops, it’s almost always because two-point field goals are being attempted farther from the rim.  Shots taken from a greater distance are less likely to go in. That’s physics, and there is no changing physics.

Want to know why Roy Hibbert is struggling to score?  The percentage of shots he has taken from 0-3 feet from the rim has dropped to a career low 24.5% from 36% over the previous two years.  From 10-16 feet, Hibbert has attempted a career high 15.5%.  Shots from 16 feet to the arc comprise another career high of 15.1% of his shots.  Hibbert needs to listen to those telling him to restrict himself to catching and finishing tight to the basket.

Hibbert’s player efficiency rating (PER) as calculated by ESPN (Player Efficiency Rating is the overall rating of a player’s per-minute statistical production – the league average is 15.00 every season) dropped from a very respectable 17.3 to 13.5.

Fans don’t need an MIT degree to know that Hibbert is struggling on the offensive end.  It’s not a matter of confidence, as many assert, as much as it’s physics.  Maybe a lack of confidence has built through the season, but shooting from a greater distance is going to erode offensive production.

How about David West?  No one talks about David’s decline because he always appears to work hard, but the statistics don’t lie.  Over the previous two seasons for the Pacers, West took an average of 33% of his shots from 0-3 feet.  This season, that number plummeted to a career low 20.1%.

As all readers of kentsterling.com are exceptionally bright, you are likely noticing a trend here.

How about embattled point guard, Indianapolis native George Hill?  Since entering the NBA as a first round pick of the San Antonio Spurs, Hill has gone to the rack less and less.  This season, Hill shot from 0-3 feet only 18.3%, and his PER dropped from 16.6 to 13.4.

The story is mostly the same for former MVP candidate Paul George.  The last two years, George made it to within three feet of the rim 26.9% of the time.  This season, that number dropped to 20.8%

There is nothing wrong with jacking up threes.  The extra point reward justifies the risk, but jumpers from 16 feet to the arc provide the lowest return possible on investment.  Over the past two seasons, George increased the percentage of shots from that no man’s land from 15.9% to 19.1%

George’s PER has actually risen this season from 16.8 to 20.2.  That increase ranks him 26th in the NBA, right between Kyle Lowry and Kyrie Irving (Hawks stretch four Paul Milsap is 32nd just 0.3 behind George).

None of those numbers in a vacuum a cause for worry, but when an aversion to finishing at the rim is consistently pervasive (minus Lance Stephenson who continues to play the way he has always played), there is something wrong, and it’s causing major offensive problems.

What causes shots being taken deeper is as logical as our previously discussed rule that the farther the shot, the less likely the ball is to go in.  When people and the ball move with purpose, the defense is more likely to make an error.  Errors cause openings closer to the basket.  When offensive players other than the ball-handler stand motionless, defense is easy.

The only thing mystifying about any of this is that the Pacers are miserable offensively despite knowing all this stuff.  They have guys on the staff who crunch numbers all day long and share the results with coaches and the front office.  How is it possible that no visually obvious steps have been taken to alter the failed dynamic of settling for shots from farther rather than closer?

Frank Vogel has one more shot to get his team to move, pass, and attack.  It comes tonight with the season on the line.