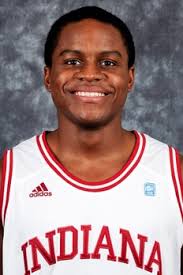 No smiles early this morning for Yogi Ferrell, who was arrested along with teammate Stanford Robinson.

Being arrested for illegal consumption and possession of a fake ID while in college is almost a rite of passage, and Indiana basketball players Yogi Ferrell and Stanford Robinson became members of that club at Kilroy’s Sports Bar early thing morning, according to a release from the Indiana State Excise Police.

Getting self-righteous about underage drinking is ridiculous, as virtually everyone who has attended Indiana University in Bloomington has been there and done that, but did Ferrell and Robinson have to step so far into the danger zone to risk getting caught?

These are the second and third arrests of basketball players for alcohol related crimes in Bloomington in the last three months.  Hanner Mosquera-Perea was booked for OWI – a far more serious charge – on Valentine’s Day.

The only part of the story that baffles is that two of the most recognizable people in Monroe County would use a fake ID.  Everyone in town knows that Ferrell is a sophomore and Robinson is a freshman, so if there is a hard ass bouncer or the dreaded excise police (similar in stature and demeanor to the Central Park Rangers in “Elf”) someplace, the card will either be confiscated or the police called.

If the police wanted to drill the message home that they aren’t playing games this weekend, who better to bust than a couple of basketball players.  Ferrell has been through this drill for two years, so he should have known that fame is a double-edged sword.

For days, reports from Bloomington have touted the multitudes of law enforcement officials stationed in likely target areas waiting to arrest students who have either consumed too much alcohol or are too young to drink at all.  There is one weekend not to use fake IDs in Bloomington, and it started last night.

Everyone I knew at IU had a fake ID but me.  Spending $10 to get a bogus Kentucky Drivers License seemed to invite more problems than it would solve, and with cases of beer selling for $8 in the 1980s, it seemed like bad economics.

Being denied entry to a bar was a pill I could swallow, but being arrested for holding a fake ID and forfeiting what amounted to a case of Bud Light (plus a six-pack) was unacceptable.

Ferrell and Robinson will be earnestly chastised by Crean, and will go through conditioning work that will reinforce the message.  The worst part of the deal for Ferrell is that he is only two weeks from turning 21.

The weekend will continue, and more dopey and entitled kids who don’t believe consequences await them for being idiots will be cuffed and tossed in the drunk tank.