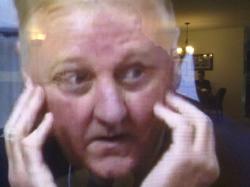 Larry Bird is usually tough to read, but last night he looked as horrified as most fans.

There are so many questions without answers that fans and media have lost hope that Indiana can vanquish the giant killing Atlanta Hawks.  If there has been an eight-seed that has looked more like a one-seed than the Hawks, I don’t remember it, and the reverse is true of the Pacers.

Coach Frank Vogel’s countenance is that of a coach who has exhausted himself by pushing every button but self destruct and eject without a tangible result.  David West appears to have been unsuccessful in keeping the youthful exuberance of Lance Stephenson channeled properly.  And during games, Roy Hibbert looks like the elderly do when they are prepped for surgery.

Basketball at the NBA level is a business for everyone.  Wins and stats help feed families, but the game is still supposed to be fun to play.  No one has ever enjoyed it less than Hibbert over the last month.  The former defensive player of the year candidate has yet to register a single block in this series.

Almost always stoic Pacers president Larry Bird has been shown all day during Sportscenter with his head in his hands as Hibbert went oh-fer in the paint last night, and Vogel’s in-game dismay resembles the look on a college student’s face when offered $50 to drink a glass of milk gone bad.

The bench tries to be supportive, but even as they rise from their seats to cheer a shot in the air, their faces bely their lack of belief it will drop.

The Pacers are a team in disarray, and all are responsible.  The fires are sprouting up so quickly, dousing them is impossible.

ESPN continues to call the Pacers plight “one of the worst collapses ever,” and why would anyone argue with the mothership other than because its job is not to be right, but engage viewers.

The real answer to all the Pacers problems, questions, doubt, and points of interest is that they are one win in Atlanta from being exactly where they are supposed to be, and they have two shots at it.

Who’s to blame?  Everyone.  Who can resurrect this team?  Everyone.  Should the Pacers go big or small?  It doesn’t matter if they play with passion and determination.  Will Hibbert find a way to make shots?  Step one for Hibbert is to get over himself, and lose this woe is me attitude.  Unless there is a physical issue of which we are not aware, he needs to focus his energy on supporting his teammates – and that goes for the rest of the Pacers.

Team success comes to those who are committed to the success of the others, and the self-loathing many Pacers display has nothing to do with teammates succeeding.  All this, “I need to elevate my game” yakking is counterproductive.

Stop pushing buttons, stop trying to answer inane media questions, stop worrying about failure.  Get mad.  Get focused.  Kick the Hawks in the damn mouth, and take what’s yours.  I also suggest not watching ESPN for the foreseeable future – in particular Linda Cohn whose blathering has become even more shrill.

Not only is Game Four not a must win game, it’s not close.  Yes, the Pacers need to win either Game Four or Game Six in Atlanta, but it doesn’t matter which one.

If the Hawks win a third game in this series, then the Pacers will face a must win.  Not before.