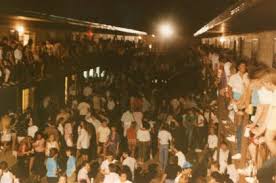 This is a picture from our last Little 500 party at Walnut Knolls. The only thing that kept it from being busted was it would have caused more damage than it saved.

Not getting arrested in Bloomington during Little 500 weekend is a lot like not being caught by a grizzly bear chasing a group of campers, you don’t have to be fast, just don’t be the slowest.

Avoiding police attention during the Little 500 weekend that started in earnest last night does not require sobriety or or a resistance to acting like a fool.  You just can’t be the drunkest or the biggest idiot.

Friends used to bring gallon jugs of screwdrivers into the race because people tend to doubt audacity.  Security knows what a hidden flask looks like, but few suspect a group of 20 students each carrying a gallon jug filled with what appears to be orange juice would be bold enough to have emptied a fifth of Popov into each.

Our impudence grew over the years to finally include fake credentials that boasted our status as “special provosts,” and during our final appearance, ushers escorted us to a special entrance so we could avoid the line.

Over the years, friends who had trouble with the law were those who earned it.  One drank himself stupid, wandered from the group, and found his way to Sembower Field.  Too drunk to locate the gate or successfully climb the fence, police arrested him as he slept in the middle of center field.

The consequences for acting stupid rarely involved the police for our friends.  A broken ankle after falling in a ditch, some bumps and bruises after doing donuts with an RV in the Memorial Stadium parking lot, random nudity, and hurt feelings of those we either directly or inadvertently insulted were the worst of the collateral damage because we maintained reasonable limits or so far exceeded the limits that authority was mystified into inaction.

Nothing in all of this to be proud of, but there are lessons learned through many years of experience that may be of some use for those in Bloomington this weekend hoping their fun does not come with a price any steeper than a groggy and wasted Sunday.

Here are some rules of the road to keep yourself and others safe:

Part of a college education is learning where societal boundaries lie.  I have been there, tested the strength of the life’s fences, and made it through unscathed.  Of course, all concern for being arrested can be avoided by abstaining, or leaving Bloomington for Little 500 weekend.  People smart enough to do that require no counsel.  This post is for those who still enjoy being in the middle of a beer and sweat soaked crowd as they bounce through a weekend of indulgence.

Click here to take THE BEST care of your teeth with the help of IU grad Dr. Mike O’Neil at Today’s Dentistry in Fishers

Little 500 Weekend should be the World’s Greatest College Weekend, but great doesn’t happen in the Monroe County lockup.