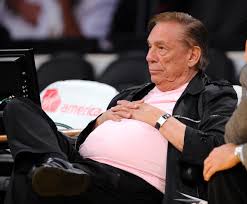 Donald Sterling is a racist? So what’s new?

Earlier, I wrote about how the NBA should mandate that idiot Donald Sterling (no relation to me; he was born Donald Tokowitz) continue to own the Los Angeles Clippers as penance for the ignorance reflected in the racist comments reported yesterday by TMZ.com.

A tape of a ridiculous conversation between Sterling and his former girlfriend was released yesterday on TMZ.com in which he said many things reflective of racism including, “I’m just saying, in your lousy f****** Instagrams, you don’t have to have yourself with, walking with black people.”

Owning a Clippers team bereft of African-Americans and anti-racists would be a more suitable punishment for Sterling than being banned from the league for being an addlepated intolerant.

It was very clever in expressing outrage, and painting racism as an ignorant attack against reason and humanity, which of course it is.  The truth is that racism and the predictable outpouring of wrath that results when boobs like Sterling have their closeted stupidity revealed is boring.

Racism is idiotic.  Yep and duh.  Coming out against a racist is like being anti-cancer.  No one in his right mind is pro-cancer or racism.

Yes, there are still plenty of racists around who keep their mouths shut unless behind closed doors with only those of their ilk with whom they are comfortable sharing their hateful ignorance.  Fortunately, most of those who still see the world as colors, religions, nationalities, sexes, and sexual preferences are of Sterling’s generation, and like Sterling, 81, will be dead soon enough.

Kooks like Sterling make the rest of us feel very superior in our indignance over judging a man by the content of his character and not the color of his skin.  Good for us.  Being smart enough to refuse to hate shouldn’t be worth much applause these days, and that’s a good thing.

NBA Commissioner Adam Silver will make a big show of suspending Sterling for a very long time, and all the talking heads will blather about how the NBA is better off without a racist in its midst.  Hard to argue with that, but are we so naive that we don’t think there are others, or that the NBA hasn’t known about Sterling’s idiocy for a very long time?

Sterling has been sued multiple times for refusing to rent apartments to African-Americans and Latinos because of race, so his rant about his girlfriend posting pictures on Instagram with African-Americans is hardly a surprise.

As for NBA players saying they would never play for a racist, every single Clippers player since 1981 has done exactly that, and the Clippers team will again today as they battle Golden State in Game Four of their playoff series.  Who knows whether there is another racist owner of an NBA team, or owns the company for which you work?

Would you resign if the owner of your company said the same things Sterling did behind a closed office door?

There are millions of people working today for all manner of stooges with crazy beliefs.  In a black and white world, money is green, and there is nothing wrong with accepting it from a moron for an honest day’s work.

Racists are ridiculous, and the punishment of living in that darkness is severe enough.  Run him out of the NBA if you like, but save the self-righteous posturing.