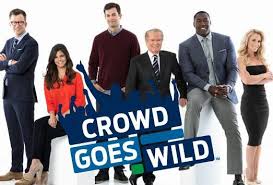 Who the hell are these people and why do I care? That’s the first question that should be answered by any producer.

There was so much wrong with the first episode of “Crowd Goes Wild” on Fox Sports 1 that they lost me for the next three months.  I tuned back because of equal shares of professional responsibility and morbid curiosity.  Same problems.

Today, I read where the show has been cancelled, so I revisited.  Same old song.  There is a way to counter program against ESPN, but this was off the mark, and the network should have known.

Here are nine examples of common programming errors that were violated by the show, and show they could have easily been corrected:

9 – Give the show time to organically develop.  I knew there would be big trouble for this show when I saw the size of the couch and the insane level of promotion that preceded its debut.  It’s a victory when a show is watchable at all in its first iteration.  Look at the first season of “Seinfeld” or “30 Rock.”  Both became great sitcoms, but the early episodes were experiments that led to the product that became timeless and nearly perfect.  Making that happen isn’t always pretty.  Driving sports media consumers en masse to the first week of programming ensured failure because viewers don’t care much for trail by error.  Always let show evolve into its best version before driving consumption.

8 – Lack of form makes show too clunky.  Panel shows can degrade into chaos without tight blocking and clearly understood roles.  Too often on “Crowd Goes Wild,” cast members talk over the top of one another.  If that is reflective of the Fox “attitude,” Fox Sports 1 should adopt a different attitude.  Shows need compartments and context.  Formless yakking is tough to consume.  Even “Chelsea Lately” has sensible chunks and solid casting.  It would be easier for producers to allow Chelsea to rap with her panel without knowing exactly who was supposed to do what and when, but the show is blocked so there is seldom any confusion as to who is saying what and when.  Smart show.

7 – Big casts are death.  NYPD Blue was a police drama on ABC in the 1990s and early 2000s from Steven Bochco, who was a great creator, producer, and writer of hour long TV dramas.  This show had a big cast, but early episodes focused on detective John Kelly (David Caruso).  Other characters were introduced through their interaction with Kelly.  Otherwise viewers would have been dizzy trying to figure out who the hell was talking, and most importantly why they should care.  The individual parts of “Crowd Goes Wild” can be pretty good if you take the time to acquaint yourself.  Katie Nolan is funny and angry, making her very unique among sister sports broadcasters.  She is a star.  Trevor Pryor had nice insights, and Michael Kosta had moments, but there was no coalescence.  Great ingredients combined incorrectly = bad stew.

6 – Casting is critical, and separation requires more than a variety of appearance.  “Crowd Goes Wild” as it is currently constituted has a blond woman with an English accent, a dark-haired American woman, an African American former NFL player, a blondish guy with glasses, and a dark haired white guy.  They all look and sound different.  Great.  The cast of “Designing Woman” always wore different color outfits.  I get it, we need different looking people to recognize any of them, but look at ABC’s female chatfest “The View.”  Not only has the cast been diverse in appearance, they have easily identified unique attitudes.  The show is cast well because the personalities deliver upon viewer expectations.  “Crowd Goes Wild” has different looking folks I don’t have any reason to see as unique.

5 – Jason Gay of the Wall Street Journal is a member of this giant cast, and on today’s show he referred to Cowboys Stadium as an arena.  Guy know sports too well to make that kind of error in nomenclature.  He sounded like principal Ed Rooney in “Ferris Bueller’s Day Off” asking the cook about a Cubs game on the restaurant TV.  A single moment like that kills all credibility.

4 – What the hell is going on here?  This show appears to be nothing more than five mostly unknowns talking about sports without any context.  One thing ESPN does that should be copied by every sportstalk radio and televised panel show is to make the segments of the shows bite sized.  A hour-long show where people babble over the top of each other segment after segment is downright unconsumable.

3 – Regis?  Hey, I love Regis Philbin.  He has has massive ups and downs over the course over his nearly 60 years in media, but he has always been equal to the task when called upon.  This show needed a broadcaster to help shape the form, but Regis was woefully miscast.  This isn’t a reflection on Regis, but producers cruelly threw a still brilliant guy into an environment where he had no chance to succeed.  No matter how big a Notre Dame fan Regis is, bringing whimsy or heft to a conversation to be consumed by hard core sports content users is a ridiculous expectation.

2 – Should have flanked ESPN on the other side.  A sports show less about sports than ESPN is always doomed.  There is a significant sect of sports fans tired of the major market focus, and devotion of time to sportsebrities like Tim Tebow.  While ESPN is very smart is the way it caters to the largest slices of its thoroughly researched audience, people in Kansas City, Indianapolis, Nashville, Columbus, Salt Lake City don’t give a damn about Jacoby Ellsbury’s assimilation to the Yankees.  Flanking ESPN should be done by being more sports oriented, not by providing additional noise and “attitude.”

1 – “More Attitude” is a terrible branding position.  What the hell does “more attitude” mean anyway?  Is it about irreverence, an aversion to real sports, or hot women as hosts?  Maybe it’s all three, but it doesn’t attract sports fans.  As I’m watching now, an entire segment is being devoted toward an interview with two women’s professional soccer players.  No matter how hot they are, no one but friends, families, and young female soccer players care about this segment.  It’s hard to outduel ESPN while talking about the NFL, but I may be one of 45 people across the entire country watching this segment, and it’s only because I’m writing about the show.

What Fox Sports 1 should do is hire radio consultant Steve Reynolds to create and deliver a two-hour show that airs from 4p-6p.  His four traits of great radio extend to all media – relevance, authenticity, fun, and innovation – and in all areas, this show fails, and predictably has been cancelled.