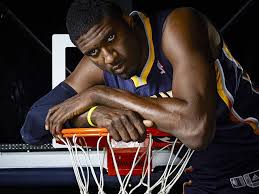 What role Roy Hibbert will play tonight for the Indiana Pacers? We’ll all find out together starting at 8:00 p.m.

Expectations are a huge factor in building a narrative for a seven-game playoff series.  Last year, the Indiana Pacers won 49 games, were the third seed, and faced a Game Five against the Atlanta Hawks with the series tied 2-2.  This year, while in the same situation against a different Hawks team, the mindset of fans and media is wildly different.

That’s what getting off to a 33-7 start and finishing atop the Eastern Conference standings will do for a coach and team.

Last year, Frank Vogel was seen as a long term solution as a coach.  If the Pacers can’t win two of their last three against the Hawks, a significant level of din for his ouster will build.

The truth is that Vogel has done a spectacular job of dealing with a unique set of personalities with varying states of financial security.  Roy Hibbert is never going to have to work a day in his life after he retires.  Lance Stephenson is earning $5,000 annually more than a back-up center who has played a total of 36 minutes.

Luis Scola and David West are 33 years old, and have significantly less tread remaining on their tires than much younger teammates who can’t imagine the end of their careers will ever come.

Those challenges aren’t necessarily unique to Vogel and the Pacers, but the intense media scrutiny in which they were immersed was entirely different.  The Pacers were the media darlings of the NBA as their team-first lovefest was in full flower.

The only thing the media enjoys blathering about more than the ascension of individuals and teams is the decline, and in one of the few times in sports history a team shoved a bunch of both into the same single season.

Now the Pacers are on the brink of doing what is almost entirely unseen outside of movies – the rise, fall, and redemption of a team in the same season.

Game Five is not a must-win for either team; it’s a boy-it’s-a-lot-better-to-be-up 3-2 than-down 2-3 game.  Winning one-of-two is a whole lot easier than winning two.

Whether the Pacers or Hawks win tonight (or any night) comes down to three issues – making shots, being the aggressor, and controlling 50-50 balls.  Whichever team does those three things best will have two bites at the apple to end this series.

The Pacers are likely to continue to employ a small lineup with only occasional stretches with Roy Hibbert in the pivot.  Ian Mahinmi reported for Hibbert with 4:16 left in the third in Game Five, and he became – to his credit – the world’s tallest cheerleader for the rest of the 91-88 win.

While many Pacers fans have enjoyed watching C.J. Watson and George Hill play together at the expense of Lance Stephenson, the Pacers went on a game winning 8-0 run after Stephenson reported with 3:59 left in the game while behind 85-81.

Tonight is the fifth chapter of this fascinating story, and everyone has an opinion as to what should happen.  The plot gets thickens and thickens, and it seems that’s the way this team likes it.  Should the Pacers go big, go small?  Will they play passively or with zeal?  With the guys on the bench watch with their heads in their hands or be as ravenously supportive as they were in Game Four?

If the Pacers win, can they close out the series in Atlanta as they did in 2013?  If the Hawks win,, can the Pacers find a way to force a Game Seven at Bankers Life Fieldhouse?

Whether the Pacers find their way out of their recurrent malaise to find the same consistent magic that led to that gaudy 33-7 start won’t be known until the Pacers either hoist a banner or suffer that miserable fourth loss in a series.