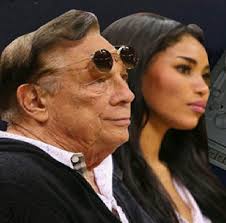 Donald Sterling will not attend Game Five of the Clippers series in Los Angeles, and may have attended his last game.

It’s always a little stunning when there is such outrage when an idiot opens his mouth.  Human beings aren’t quite as bright as we like to think we are.

People tend to enjoy disliking each other for their differences, and they have for the expanse of recorded history.  I’m not sure why, but whether it’s because of religion, race, nationality, sexual orientation, skin color within races, size, or financial status, we see what is not like us and shun.

There isn’t a school in the country without a bully or 12 among the students.  In the workplace, the popular are promoted while those without ambition and/or charisma tirelessly do the grunt work everyday to keep the wheels moving.

So when the world stops because a longstanding moron like Los Angeles Clippers owner Donald Sterling (no relation – he was born Donald Tokowitz) moans about his wife posting pictures of herself with black people on Instagram, I shrug.  Did anyone not know he’s been sued multiple times for refusing to rent to African Americans and Latinos?  Elgin Baylor is suing him for discrimination.  Why did it take a TMZ report to open our eyes to this buffoon’s myopic views on race?

What Sterling said was predictably narrow minded, and while his stupidity is loathsome enough to get him drummed out of the NBA – and likely will – all of the people crowing about his boobery better take an inventory of their own attitudes and behavior.

People enjoy pointing a finger at the outrageously hateful and casting them out, but most in some way, shape, or form represent the same narrowness.

Most are smart enough to keep their stereotyping under wraps, behind closed doors, or away from recording devices, but somewhere in the hearts of many more than we would like to admit lies intolerance.

Of course, Sterling is a buffoon.  He’s always been a buffoon who has long been thought to be the worst owner in major league sports.  He should be lanced from the NBA as the carbuncle on its ass that he is, but he has been the owner of the Clippers since 1981.  Anyone with access to wikipedia should have been aware of Sterling’s predilection toward racism.

One of the more telling aspects of the recordings released by TMZ comes when Sterling incredulously asks his girlfriend whether she believes him to be a racist.  She replies that in her eyes he is not a racist.

Sadly, few believe their philosophies on cultural stereotyping represent anything but common sense.  Sterling is likely sitting in his home this morning watching endless reports on Sportscenter about the response to the recording of his strange and hateful rant.  I’m sure he feels picked upon, and wonders what he did to deserve this level of scrutiny.

For over 80 years, he has been what and who he is, and all of a sudden he’s a pariah?  The Los Angeles office of the NAACP was going to honor him next month at a dinner, and now he’s the poster boy for racism?  What kind of vetting did the NAACP do as it assessed the qualifications for an award of that magnitude?

There is a lot of stupidity in our society.  We’re barely a half century removed from lynchings, turning fire houses on peaceful marches, and government sanctioned overt segregation – all done without apology in the light of day.

It would be great if the outraged expressed toward Sterling represented enlightenment, but we have a long way to go in loving and empathizing with one another.

Regardless of size, shape, color, belief, color, nationality, religion, and class, we each owe the best we have to one another.  While we correctly chastise Sterling for his bizarre aversion to a girlfriend posting pictures with African Americans, maybe some of us can take this opportunity to look in the mirror at the way we treat each other.

2 thoughts on “Why are we surprised by Los Angeles Clippers owner Donald Sterling’s ignorance?”