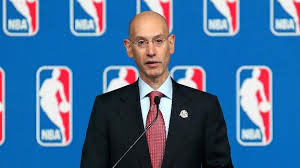 This is the first time we have seen new NBA commissioner Adam Silver set the tone for the league he oversees.  He’s gone on his little goodwill tour of arenas and made many media appearances, but faced no adversity.  Saturday, potentially radioactive adversity in the form of racially offensive and absurd comments made public by TMZ landed squarely on his desk.

Just over 72 hours later, Silver acted with measured vengeance to show everyone that when wrong is done, he will act swiftly and surely.  Not just a tall, bald, smiling, geeky lawyer fans see only during the second round of the NBA Draft anymore; today he looked like a leader.

We like grading people here, so we assessed Silver’s deeds, performance, and words today and offer grades for each.  It bears mention that I am an exception tough evaluator and have an aversion to bureaucrats in positions of power.

Deeds – A   Silver announced a lifetime ban, a $2.5 million fine that represents the highest level available, and a pledge to force the sale of the Los Angeles Clippers.  He also apologized on behalf of the NBA to virtually anyone who was offended, outraged, or hurt by Sterling’s chastising of his girlfriend for posting pictures of herself with “black people” on Instagram.

For the NBA to compel Sterling to sell the team, 75% of the other 29 owners must vote to expel him.  Expect the vote, if it is public, to be 29-0.  If it is not made public, shame on the owners and Silver for refusing to make this a transparent process.

As it stands now, Silver gets an A because this was the absolute maximum force that could be brought to bear against an unrepentant moron.

As for why Sterling was an owner after the 30+ years of bizarre behavior that included lawsuits alleging racism, it’s unfair to hold Silver responsible as he has only been the commissioner for 12 weeks.

Words – A  Lawyers know when to yap and when to stop, and Silver was perfect is saying what needed to be said and nothing more.  Lawsuits are won and lost based upon the ability to know when to shut up.  Silver could have expressed an even more indignant stance, using wild invective and hyperbole, but he kept it tight and direct while being complete.

Law students who want to know exactly how to speak into a microphone during times of strife should study the press conference performance of Silver.

Performance – A  Really good.  We grade Silver on the curve because he is not exactly charismatic.  He was as compelling as he possibly could have hoped to be.  Leaders should always be in command, and Silver was in charge through the entire press conference.  There were some challenging questions, and Silver answered them honestly and briefly.

This is only part of the final grade for Silver and the other 29 owners who employ him.  The follow through will be even more important.  Sterling is a cantankerous prick, and is likely to go down kicking and screaming.  The pressure will need to be relentless to finally remove the racist Sterling completely from a position at the table for an enterprise whose employees are between 70%-80% African American.

Sterling is a pariah who has been permanently ostracized and marginalized, and Silver played a significant role in word and deeds to get that done today.

Today, Silver joined Roger Goodell as major league commissioners who are serious about doing their jobs in leading their leagues.