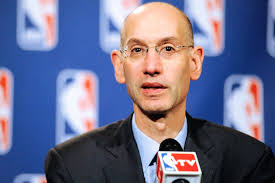 Adam Silver had some fun yesterday doing both the thing that made him feel good and made the best business sense.

The opportunity to do the right thing and the most practical thing simultaneously doesn’t come along very often for a guy in charge, but it happened yesterday for NBA commissioner Adam Silver.

Los Angeles Clippers owner Donald Sterling is just that big a tool, and Silver has him to thank for grooving a batting practice fastball for him.

For over three decades of ownership, Sterling has been a bizarre wing nut who has been sued again and again for racist business practices.  He was one of the worst owners in sports, and universally loathed by anyone who paid attention to the Clippers or justice.

Silver was able to cast out a racist, thrill both white and African American NBA players, coaches, staff, and fans, and piss off no one other than Sterling himself.  He was able to stave off the unpleasantness of a threatened boycott, and extoll the virtues of the NBA as an enterprise that welcomes all.

Sterling has been an iconoclast as an owner and human being throughout his life, and has never made an effort to gather friends and advocates.  A quick count of those who have said a remotely pleasant thing about Sterling as a businessman or human being come to zero.

Did it take great guts to exorcise a friendless pariah?  No, it was a slam-dunk simple call.  There was no option for Silver.  Without whacking Sterling with the absolute maximum penalty, the NBA might very easily have imploded with Silver seen as the cause.

That doesn’t mitigate the correctitude of Silver’s words and actions in yesterday’s press conference, but what he did was hardly heroic.  He did what was prudent.  Prudence is not the stuff of heroes.

As for charges that the NBA should have acted sooner rather than allow Sterling to become the longest standing owner in the NBA, the burden for explanation belongs to Silver’s predecessor David Stern.  Silver has been on the job for three months, and bears no responsibility for anything that happened prior to February 1 when he took charge.

One day, Silver is going to have to make a 50-50 decision that requires foresight and wisdom.  He’s going to show his true colors on that day.  Yesterday wasn’t that day.