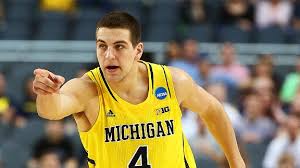 Mitch McGary’s penalty for a first dirty drug test forced him into the NBA Draft.

The NCAA screwing things up has become so routine that I don’t bother writing about it much anymore.

A full year rip for Michigan’s Mitch McGary testing positive a first time for marijuana, especially when he was physically unable to compete, is insane.  A rule change that will go into effect on August first will make it half as insane.

Beginning on that date, a player testing positive for a banned substance the first time will lose eligibility to compete for a half year and half season.  Less nutty is better than more nutty, so I guess the NCAA should be booed half as loudly because of the change.

That doesn’t help McGary, who declared his eligibility for the NBA as a result of the suspension, and it doesn’t help Michigan who could have used the big man after losing Nick Stauskas and Glenn Robinson III to the draft.

College is a place where people learn about self-discipline without the comparatively massive penalties that exist in adulthood, and substance abuse is a big part of that equation.  To bring life altering consequences to a kid like McGary because of a positive pot test is a hideous overreaction to a problem that doesn’t necessarily exist with each individual.

The penalty for recreational drugs is reminiscent of the punitive sentences in our legal system.  Addiction is a disease, and should be treated as such.  Assuming that people who test positive suffer from an addiction is a leap, but one of the markers for addiction is that a person ignores long term consequence in using a drug, so let’s assume addiction exists among a healthy percentage of those who flunk the test.

How does sitting out for a year – or half-year – aid an athlete in overcoming addiction?  In what way did the one-year suspension help McGary – or anyone else?  Is the disincentive effective in giving athletes a reason to say no?  Even if it is, what’s the point?  How many of our overstuffed prisons are filled with addicts who have no mechanism to get sober?

Recreational drug use for college athletes is best addressed at the local level where gray areas can be a factor in determining consequence.

Let’s say Player A at Sterling State is addicted to meth, commits to treatment, continues aftercare, and stays clean.  A mandated suspension existing into that sobriety would be – and is – asinine.

The real world answer to the need for a global rule speaks to the selfishness and ignorance of coaches.  If a player can shoot well while stoned, why would a coach care invest in the help he or she needs.  Being the school where stoners could indulge without fear would be a great recruiting advantage with some kids.  True enough, but that doesn’t justify enacting a bad rule.

McGary is leaving Michigan rather than sit for a year, just as most reasonable people would.  The NCAA is the cause for a college student abandoning his education.  That can’t be the result they hoped to cause when they decided flunking a first test should bring the wrath of God down on an athlete.

Zero tolerance for illegal drug use speaks to an ignorance that should be repelled by institutions that supposedly instill wisdom and logic.

No rule is perfect, but this one is stupid.