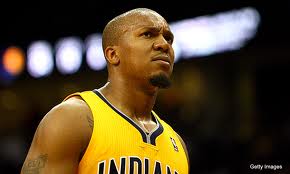 Game Seven on Saturday night in Indianapolis is the reward for the 82 regular season games of hard work.  The top seed will host the winner-take-all matchup between two very different but similarly determined teams.

The Pacers closed Game Six with the confidence of a #1 seed to wrap up the kind of battle of attrition they are built to play and win.

The Pacers won 95-88 in a game that was there for the taking for both teams.  David West made the decision that he was not going to go into that good night without a serious fight, and put the Pacers on his shoulders down five points with three-minutes left.  He scored 12 in the fourth quarter and six in the final three minutes as he led or tied for the team lead in every positive statistical category but blocks (24 points, 11 rebounds, six assists, and two steals).

Because of a report of Paul George leaving the bench during a squabble between George Hill and Mike Scott late in the second quarter, there is some question as to whether George might be suspended for Game Seven.  I’ve watched the Fox Sports replay too many times to count, and George barrel got his feet on the playing area before being corralled by assistant coach Nate McMillan.

George never made an aggressive move onto the floor – more of a passive step barely across the sideline.  The can be no inference of a desire to engage in the brief spat.

To suspend George as a result of his movement toward the fracas would massacre the spirit of the rule, and cause a wildly disproportionate disadvantage for the Pacers in a critical game.  It would be a stunning turn if somehow the NBA felt a suspension appropriate, but awaiting word from the NBA office certainly will make Friday interesting for Pacers fans.

Problems for center Roy Hibbert continued as he failed to score in 12 minutes.  Hibbert’s +/- was a -12.  That can occasionally be a misleading statistic – as with Chris Copeland’s +17 in Game Five – but in this case it was an accurate snapshot of Hibbert’s night.

He was one of only two Pacers with a negative number, nearly double George Hill’s -7.  Paul George was a dominating +19 as he shared Pacers scoring honors with West.

Let’s give the Hibbert bashing – earned though it may be – a rest for one night.  This oddly dysfunctional and unpredictable group found a way to extend their season for at least one more game, and as is usually the case in a win, the defense came through with some spectacular late stops.

Throughout the game, the Pacers made it difficult for the Hawks to shoot well by challenging shots.  The Hawks made only 35.8% from the field and were 9-35 from beyond the arc.  The Pacers weren’t much better, hitting 42.9% and 30%, but it was enough.

If the Pacers win Saturday night, there will be questions about how they can possibly stop the Washington Wizards, who are even faster that the Hawks.  If they lose, it will be time for the obituary the Indianapolis media has been itching to write for weeks.

Fans should concentrate on the same thing the Pacers will – exist in the moment, and enjoy it.  And hope Paul George isn’t in street clothes.

One thought on “Indiana Pacers rise up to force a Game Seven in Atlanta thriller; Will Paul George be suspended for Game Seven?”