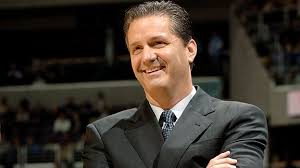 John Calipari will have a much more talented front line in Lexington than what the Lakers will cobble together.

There have been rumors for weeks that Mike D’Antoni would be fired as coach of the Los Angeles Lakers, and that Kentucky coach John Calipari would be a front-runner for the gig.

D’Antoni was removed yesterday (do you think the Lakers are paying him better than half his 2014-2015 salary because the Buss Family is acting like Don Ameche in “Cocoon”?), and Calipari is being prominently discussed as his replacement.

Only one reason is needed to explain Calipari’s indifference to the Lakers’ job.  The money would be sweetened a little in LA, and the climate is more than a little better, so it isn’t either of those.  It’s always not an affinity to celebrities either.  In Lexington, seldom employed Ashley Judd is always weeping or cheering somewhere in Rupp Arena.  Los Angeles has Shia LaBouef, Tom Cruise, Corey Feldman, and thousands of other self-important doofuses.  I guess that’s a push.

The advantage in the Lakers vs. Lexington battle for Calipari’s loyalty is listed on the rosters for both.  The Lakers are a dysfunctional calamity with the perhaps terminally injured Kobe Bryant, the ancient Steve Nash, and the NBA’s Mr. Irrelevant for 2012 Robert Sacre.  Sacre bleu!  He sure did.

Kentucky will return the best stable of players in the country, and add to it with four of the top ranked 35 incoming freshmen.  If Calipari ever dreamed of a shot at going undefeated, this is the roster to do it.  Willie Cauley-Stein, Alex Poythress, Dakari Johnson, Karl Townes Jr., and Trey Lyles gives the Wildcats five future first rounders on their front line.  Marcus Lee on a roster would thrill the fans of 350 of the division one teams in college basketball.  At Kentucky, he’s going to have a tough time getting on the floor.

The Lakers will be active in the free agent market, but a game between Kentucky and the Lakers opening night roster would have to be a pick ’em at best for LA.

There is no stack of cash high enough to make Calipari look twice at heading west.  He said as much today on twitter, “Before it starts, I’m totally committed to helping this group of young men reach their dreams. I wouldn’t & couldn’t leave this group!”

Ninety percent of the time, I have no trust in what Calipari says on Twitter or to the media, but why would he bolt for another job now when his stock is almost guaranteed to be higher after next season?

One thought on “No chance John Calipari takes the Lakers job; why would he?”