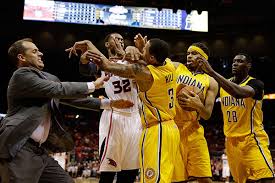 Lots of arms and hands flying, but no damage done was the verdict of the NBA.

The NBA made its second correct call of the week when it decided that the teachers handled this ruckus correctly in the gym, and the principal needn’t busy himself with additional punishment for a couple of good kids.

Indiana Pacers wings Paul George and Rasual Butler of the Pacers both took a step or two onto the court when the Atlanta Hawks Mike Scott and Pacers guard George Hill went after each other after being tangled up as they pursued a rebound.

Rules governing bench players entering an on-court altercation allow for some gray area interpretation of the suspension required for leaving the immediate area of the bench, and it was correctly applied.

George and Butler will be in uniform and ready to wage war in the contest that will determine whether the Pacers will join the ignominious roster of #1 seeds upset by an eight seed, or advance to play the Washington Wizards in the second round of the NBA Playoffs.

What many, including me, did not know is the benches at Philips Arena are closer to the sideline than in many NBA arenas, so a step onto the floor as George and Butler took last night might have been a foot off the court at other arenas.

Another mitigating circumstance might have been the photo of the Hawks bench that showed many Hawks who took to the court to get a better view of the melee.  Their behavior was no more or less menacing than either George’s or Butler’s.  The video evidence of who stepped onto the court was blurry, and determining who among the Hawks might have violated the rule would have been impossible without the photo enhancement software the FBI uses.

There was speculation that Scott might receive a one-game rip for a shove to Hill late in the fracas, but that was deemed equally unnecessary.

This situation was better left unaddressed by the NBA, and thankfully the Pacers and Hawks will both be at even strength 24-hours from now when the odd saga of this interminable series comes to a climax.

This will be the first NBA Game Seven in Indianapolis history, and it’s good and right their best player will be allowed to play.