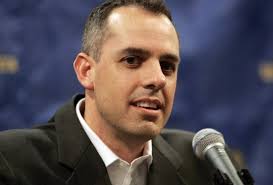 Frank Vogel has exerienced a lot of ups and downs in one fascinating season.

Fans thought Pacers coach Frank Vogel was crazy for faithfully trotting Roy Hibbert out there to start every single game of the series against the Atlanta Hawks.  After games five and six, when Hibbert scored a grand total of zero points, Vogel was virtually alone in believing there might be a different result for the big fella in Game Seven.

Decisions like starting Hibbert yesterday are why Vogel makes the big bucks, and also why he emerged from obscurity just over three years ago to lead one of the NBA’s emerging powers.

Finally, after six games of a frustrating lack of production, Hibbert earned position on the block, caught the ball, and scored 13 points in 31 minutes.  Most importantly, he and Ian Mahinmi did a great job of discouraging the Hawks from trying to score the ball anywhere near the basket as the Hawks attempted a dizzying 44 three-pointers which accounted for 47.8% of their total attempts.

The Pacers are moving on to the second round against the Washington Wizards in large part because of Hibbert’s contributions to the 92-80 victory, and they are going to need Hibbert at his best to advance to the Eastern Conference Finals for the second straight season.

Vultures have been circling Bankers Life Fieldhouse for weeks awaiting the corpse of Vogel’s coaching career to be thrown onto Pennsyvania Street as the Pacers appeared on the brink of a histories collapse, but fans and media need to remember that their narrative isn’t always THE narrative.  Vogel had been identified by an anonymous source to ESPN’s Marc Stein as the scapegoat for the pending doom, and then ESPN reporters repeatedly pestered Vogel and the rest of the Pacers about the reports.

As is the case with effective leaders, Vogel paid no attention to his own obituary, the increasingly hostile level of questions from media, or boos from frustrated fans.  He backed his boys, and in turn they delivered for him.

Just as was the case at the end of the regular season when they finished atop the Eastern Conference, the Pacers are exactly where they hoped to be after the first round.  Style points mean nothing in sports (figure skating is a skill, not a sport), and that’s a good thing for the Pacers because finding their way to the second round was not pretty.

Vogel remains the coach, and Hibbert remains the starting center for a team that is one step closer to the NBA Championship it craves.

The Wizards run a more traditional offense, which is more good news for Vogel, Hibbert, and the rest of the Pacers.  Marcin Gortat and Nene are 6-45 from beyond the arc in a combined 19 seasons in the NBA.  Translation – they are not stretch bigs, and that means Hibbert won’t be asked to move around too much defensively.

The bad news is that if the Pacers tired of Jeff Teague’s speed in breaking down their defense, John Wall and Bradley Beal are even faster.  In transition, Wall is blinding, and Beal is a very productive offensive player in only his second season out of Florida.

While fans are still celebrating the win against the Hawks, Vogel and the Pacers are working on quickly implementing a more customary game plan for a Wizards series that begins tomorrow night in Indy.

Fans who were clamoring for Vogel’s ouster are now smiling advocates for his reign as coach to continue.  Those who were hoping that Phil Jackson might be enticed to offer the Pacers some combination of expensive spare parts for Hibbert (a Bill Cartwright-esque triangle offense center), are now singing his praises.

Winning cures a lot of ills, and vanquishing the Hawks after being down 3-2 was a nice first step in the refurbishment of the Vogel brand in Indianapolis, but it was only a step.  To finally silence the doubters, the Pacers will need to advance one more time.

As for Hibbert, this matchup is much better for him.  While averaging only 11 points per game, his +/- was +43 during the three regular season games against the Wizards.

The road to redemption continues tomorrow night at 7p for the Pacers and their former future ex-coach.