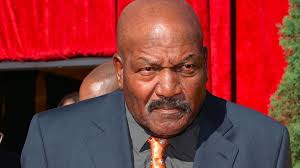 Jim Brown shows up with a grimace, even self-immersed doofuses like college presidents will listen intently to what he has to say.

The NCAA was a miscast target of one of the greatest collegiate athletes of all time.

Hall of famer Jim Brown correctly feels that college football and men’s basketball players are exploited, but hanging responsibility on the Indianapolis based organization that oversees college athletics misses the mark.

NCAA president Mark Emmert and his staff operate at the pleasure of university presidents from member institutions.

Among his quotes while on a panel at the Pro Football Hall of Fame:

All of the issues that sparked Brown’s well-intentioned diatribe are authored by the schools themselves, not the NCAA.  That’s not a minor distinction because as long as dissatisfaction is aimed at Emmert, the presidents with the power get a free pass.

Emmert rightly reviled as a bureaucratic twit, but he has no more power to affect change in college athletics than you and I do.  University presidents vote on rule changes as recommended by committees staffed by small groups of university representatives.

Not a day has gone by during the four years Emmert has been in charge of the NCAA that he hasn’t privately lamented some of the less logical rules he is paid to enforce.  The cream-cheese-elevating-a-bagel’s-status-from-snack-to-meal rule that will finally be corrected on August 1 being at the top of the list, but without the members voting to change it, Emmert was forced to answer for the rule during every interview he took part in.

Brown has been on the right side of history many times as an advocate for common sense, and everything he said was reasonable, but he should hold the correct people accountable if he wants to affect the changes he seeks.

He should start with the recently named head of his alma mater, Syracuse University. A visit by Brown to SU president Kent Syverud would likely be an impactful moment and might turn the former dean of Washington University’s law school into an ambassador for all that college sports can and should be.

3 thoughts on “Jim Brown rips NCAA; should save venom for university presidents”