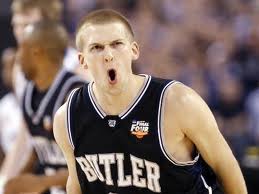 Zach Hahn is a great competitor, but I’ve never seen it get in the way of his humanity.

A week and a half ago, Center Grove High School administrators made the bold and wise choice to hire soon-to-be 26-year old Butler grad Zach Hahn to lead the Trojans back toward success after a disappointing 9-13 season.

Zach does three things exceptionally well – work, compete, and empathize.  That’s a solid behavior set for a coach.  There is one commonality among the teams for which he played – they won, and not in small part because of Zach’s skill, drive, and presence.

New Castle won their first state championship since 1932 with Zach at point guard, Butler advanced to the National Championship game during his last two seasons with the Bulldogs, and his AAU team won 90% of its games over his three seasons.

It was as a part of the AAU team that I became acquainted with Zach and his family.  My son and Zach were teammates for 200+ games and went on dozens of trips around the country to play the best competition in America.  His relentless competitive fire was obvious on the floor, and his character was often revealed off of it.

The Spiece Central Stars was a fascinating group of kids who knew and loved basketball at a level that made it a natural fit for many of the players to become coaches.  Two of the players are still earning money as players.  JaJuan Johnson was the Big Ten Player of the year in 2011 before becoming a first round pick of the Boston Celtics, and is currently playing in Italy.  Matt Howard is playing in Germany after a great career as Zach’s teammate at Butler.

Many of the rest are coaching in some respect – Nate Blank at Terre Haute North HS, John Ashworth at Franklin Central HS, Ben Botts at Princeton University, Ryan Sterling at Cathedral HS, and Terran Bibbs in England.  They played like you might guess a bunch of future coaches would – precisely.  To say they understood basketball is like saying fish know swimming.

They could shoot, were fundamentally sound, and often beat much bigger and more athletic teams.

There are a few stories about Zach from those many tournaments that illuminate the kind of player and person he was back then.  I’m sure he wouldn’t mind me telling them.

At the last practice before the AAU National Championship prior to their junior year of high school, both Zach and my son rolled their ankles.  They blew up like balloons, and I knew that a second degree sprain meant a week to ten days for Ryan before he could function on the floor.

Talking to Zach’s dad Andy, I mentioned how it sucked for the boys that they would miss the early part of the tournament.  Andy looked at me like I was nuts, “Oh, Zach’ll play.”  I asked how.  He said, “We’ll get the swelling out tonight, and he’ll be fine.”  I thought maybe Andy had learned about a treatment that somehow I had missed and asked him to share it.  “We get two buckets.  Fill one with ice and water and the other with hot water.  He sticks his foot in one until he can’t stand it, and then switches to the other until the swelling is gone.”

I was both stunned and awed.  The orthopedic guy who had worked with Ryan before had never told us about this old school remedy, so I dismissed it as Flintstones medicine.  Fast forward to the end of the story, and Zach played the entire tourney while Ryan responsibly rehabbed.

The next story was during the second to last tournament the kids played together.  They moved the pool play and the early bracket games of the Reebok Big Time in Las Vegas until a bad draw gave them a shot at the SoCal AllStars with Kevin Love, Brandon Jennings, and Taylor King.  This was thought of by fans as a potential walkover for SoCal, but the kids knew better.

The game was very close throughout, and our guys trailed with under :30 left.  Zach had the ball in the corner with :15 left.  A trap came, Zach tried to wriggle through, and just as he found enough space to force up a shot, coach Pat Mullin did the smart thing and called timeout with :11 remaining.  The shot sliced through the net, but the referee ruled the timeout came prior to the shot and we lost.

Immediately after the game, I watched and listened as Zach put his arm around his coach and told him, “You did exactly the right thing.”  Not many 18-year olds would have had the empathy needed to help his coach through the immediate after effects of a tough loss that his decision hastened.

Who wouldn’t want their son to be coached by the man that kid has become?

My favorite part of Zach’s game was his sense of when the dagger should be inserted into an opponent.  A lot of people think the fatal blow can only be struck late in a close game, but Zach knew a three-pointer while up 13 with 8:00 left was just as deadly.  I can’t tell you how many games Zach ended games with a three-pointer at exactly the right time.

Zach was a great kid, is a fine young man, and will be an invaluable mentor for a bunch of kids who will have the good fortune of playing basketball for someone who knows the game, how to develop players, and support people.