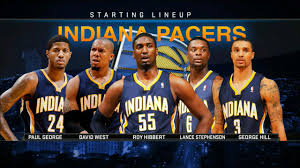 The Indiana Pacers will either win or lose tonight. What, you thought I would pull out a deck of Tarot cards or read tea leaves to tell you something else.

Since the Indiana Pacers played their way past the eight seed Atlanta Hawks less than 48 hours ago, I’ve unsuccessfully tried to get a feel for the second round matchup with the Washington Wizards that begins in 90 minutes.

I usually have a feeling one way or the other, but I feel like the grizzled lady at the carnival gazing into a foggy crystal ball.  She usually finds a way to bluff her way through seeing the future.  Me?  I can see the Pacers winning or losing this series in five games, which is not a solid perspective.

Wall won’t be a big problem for his counterpart on the Pacers.  George Hill has been a mostly successful answer to Wall, but the former #1 pick out of Kentucky could be a big problem for rim protector Roy Hibbert.  Quick shots prior to Hibbert settling in on defense could keep him from affecting the Wizards efforts to drive to the bucket.

That said, the assumption that fast is better for the Wizards was disproven in the final game of the series against the Bulls, when the Wizards won despite scoring only 75 points on 74 shots.n  Of course, it’s true the Bulls sucked, so getting a feel for the Wizards based upon the result against Chicago is a futile effort.

Indiana lost the final game the two teams played two days after the all important home win March 26th against the Miami Heat.  Whether it was a trap game or not, who knows?  But as you look at the schedule, that assumption is easy to make.

It’s hard to imagine that the Pacers learned nothing about focus during the Hawks series, but they haven’t been too keen on learning while winning.  With their backs against the wall, the Pacers are resilient, but it appears to require serious peril to motivate them.  The Pacers lost Game One to the Hawks and still won the series, so it’s entirely possible the wrong lesson has taken root.

Presenting a coherent series of arguments about the Pacers likelihood of winning or losing this series would prompt a passionate response, and that’s sort of the point of sharing perspective about sports, so here is my bold statement:

If the Pacers win this series against the Wizards, they will sprint straight through the Eastern Conference Finals to the NBA Finals, where they will lose to the representative of the West.  That’s it.  Other than that, I have no idea what the hell is going to happen.

Unlike Game One against the Hawks, tonight is going to be a big deal in this series.  The Pacers need to be ready to attack from the tip because if they don’t, Wall and Beal are not Teague and Korver.  The Pacers might not be able to crawl back into this thing against a more talented team.

The Pacers may sweep, and the Wizards might win in six.  The Pacers could win in seven, or the Wizards could sweep.  Everything is possible because nothing is out of the question.

I’m picking the Pacers in seven, because doing anything the easy way is not in their character.  Looking into the abyss and fighting is in the Pacers DNA, but so is crawling to the very edge to take a look.

Whatever happens, fans are likely to alternately feel very good and terrible about the Pacers prospects.  They will be wrong regardless.  Such will be the legacy of NBA’s lovable and frustrating schizophrenics.