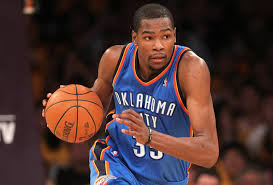 Today’s professional athletes get a bum rap for being self-immersed mopes unable to recognize the effect others have upon their lives.  At least one of them does.

Oklahoma City Thunder forward Kevin Durant was named the NBA’s Most Valuable Player today, and he accepted the award by honoring virtually everyone in his life but himself – teammates, coaches, and he saved his mom for last.

There were tears, I love yous, and meaningful compliments for those with whom he is trying to win an NBA title.  Durant cried as he spoke about his mom, and it will take a half-dozen Shamwows to dry the puddles of tears that streamed down her face throughout the generous, heartfelt, and gracious speech.

Sadly, the speech was absolutely unique among others we have been subjected to over the years as athletes spend most of their time and effort patting themselves on the back.

Whether it was LeBron James stepping into an ill-advised spotlight to announce where he would take his talents, or Marshall Faulk waxing rhapsodic about his own sacrifices in an NFL Hall of Fame induction speech that was long enough to need an intermission, speeches by those very impressed with themselves far outnumber the kind of wonderful sentiments Durant imparted.

The Oklahoman dubbed Durant “Mr. Unreliable” last week, and the response from sponsors and subscribers was significant enough to require the editor to apologize.  Now we know why the fans responded so angrily.

Durant claimed to have wanted only to be a youth basketball coach before earning a scholarship to the University of Texas and being drafted by the Seattle Sonics before the franchise moved to Oklahoma City, “My dream was to become a rec league coach,” Durant said. “That’s what I wanted to do. I wanted to stay home and help the kids out and be a coach.

“I loved basketball so much, I loved playing it, I just never thought that I could make it to college, the NBA or stand up here in front of you guys and be the NBA MVP. It’s just a surreal feeling and I’ve had to much help.”

Durant did briefly lapse into mentioning himself, but only to provide context to this being a community award rather than a personal one, “I put in so much work and so many people helped me,” he said. “I feel like we all won it. Our equipment guy gave me a hug today and said, ‘This is my first MVP,’ and I thought about that. And I said, ‘Yeah, this is our first MVP.’ I couldn’t have done it without the teammates, without the trainer. Everybody. We all just did this together.”

He spoke of the moment he, his mom, and brother hugged in the middle of an apartment without furniture they had just moved into, believing they had finally made it.  And he called his mom “the real MVP.”

Parents tired from endless searches for athletic role models have finally found a worthy target, and the NBA finally has a star who behaves like a human being.

If you missed it, take a look below, and if you are a professional athlete, watch it and take some notes.